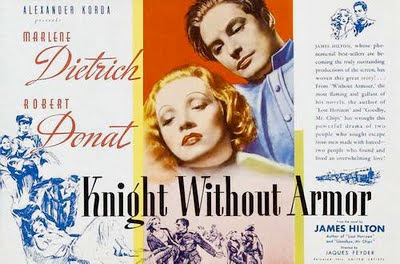 Knight Without Armour was one of the more lavish 1930s productions of the British film industry. The scale of the movie was spectacular and producer Alexander Korda imported Marlene Dietrich to star, for which she was paid a colossal salary (and she was worth every penny). The gamble paid off and the movie made money.

Dietrich is paired with Robert Donat, at that time one of Britain’s biggest stars, in what is a lovers on the run movie with a difference. It’s also a kind of espionage movie, although again an unconventional one.

The first half hour or so is spent establishing the background. Writer Frances Marion (who adapted James Hilton’s novel) and director Jacques Feyder do a find job of setting this up quit economically considering the considerable complexity of the plot.

Donat is Ainsley J. Fothergill, a rather inoffensive Englishman working as a translator and journalist in Czarist Russia in 1913. He is recruited by the British secret service. His task is to infiltrate the revolutionary underground in St Petersburg and report back to the British government on the seriousness of the threat posed by this movement. He has little success as a spy and is captured by the Secret Police and sent to Siberia.

Three years later the prisoners in Siberia are freed in the wake of the evolution. Fothergill has befriended a leading communist in prison, a man who becomes a powerful figure under the Bolshevik regime. As a result Fothergill finds himself appointed as a commissar. His first major task is to escort the beautiful Countess Alexandra Vladinoff to Petrograd for trial. She has to removed to Petrograd before the local peasants lynch her as a wicked aristocrat.

Fothergill has no intention of delivering the countess to the Cheka (the murderous Soviet secret police). Apart from the fact that he’s a decent fellow and would never do such a thing anyway he has fallen in love the countess (and she has fallen for him). The rest of the movie comprises their desperate attempts to stay one step ahead of the secret police whilst finding themselves caught in the middle of the Civil War and having to dodge both the White and Red Armies.

The brave new world of the Revolution has turned Russia into a butcher’s yard and created a nightmare world of chaos. The two unlikely lovers have the odds sacked against them but all they can do is to keep running.

Jacques Feyder and cinematographer Harry Stradling create a moody epic that is utterly enthralling. The visuals are stunning, with some great night scenes. Much of the action centres around trains, which are always good for both suspense and atmosphere. The psychological stress brought by civil war is neatly (and movingly) encapsulated by a memorable sequence at a railway station where the station master continues faithfully to carry out duties, signalling trains that never arrive and instructing non-existent passengers to board non-existent trains.

Another memorable scene occurs in the immediate aftermath of Revolution. The Countess wakes up and finds herself completely alone in her palace. She calls for the servants but no-one answers. In confusion she wanders out into the grounds and is still alone - until suddenly a horde of revolutionary peasants appears over the crest of a ridge and bears down upon her. But she is an aristocrat and bravely faces the mob.

While the Bolsheviks are depicted as the chief villains a civil war brutalises everybody and their White opponents are equally as enthusiastic in machine-gunning their political enemies whenever they are able to capture them.

Robert Donat was extremely ill during the filming (he suffered from very severe asthma which in the 1930s was practically untreatable) and could not have completed the film without Marlene Dietrich. She insisted that he not be replaced and her support and encourage got him through. Despite his health problem he gives (as always) a superb performance. Fothergill might in theory have been a spy but he has long ceased to care about politics, his only concerns being to survive and to ensure that the woman he loves survives.

Dietrich is at her best in what is a very sympathetic and vulnerable role. The chemistry between the two leads is terrific and their unlikely love seems completely believable.

This movie has apparently been released on DVD. I saw it on late-night Australian television. It was a decent enough print although I’m now tempted to get hold of the DVD.

A great love story with an epic sweep, and a beautifully filmed movie. Highly recommended.
Posted by dfordoom at 12:56 PM