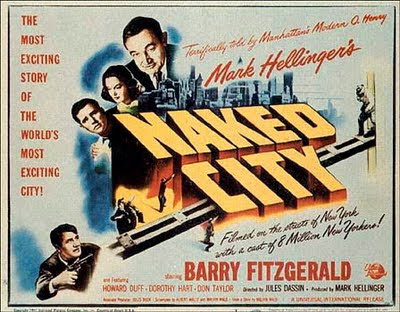 The Naked City was one of the most influential crime movies in Hollywood history. Released in 1948 it more or less established the template for the police procedural. But is it a good movie? The answer to that, sadly, is no.

It’s also most definitely not a film noir although you’ll find it included on just about list of film noirs.

It’s a movie with a reputation that is based entirely on the way the material was handled rather than the actual plot. So we’ll get the plot out of the way first. At 1 am in New York a model named Jean Dexter is murdered. At first there are very few leads. There’s a middle-aged man called Henderson who appears to have been her lover (or perhaps more probably her sugar daddy). No trace of Henderson can be found. And there’s a guy named Frank Niles who certainly knew her. Everything Niles tells the police turns out to be a lie so despite having an apparently airtight alibi he becomes the focus of the investigation.

The movie than follows, in considerable detail, the painstaking process whereby the police finally track down the killer. There are no flights of inspiration involved - just lots of routine police work.

It was promoted as the first movie to be shot entirely on location with no studio shooting whatsoever. The claim is rather doubtful. There are several scenes that certainly look like studio interiors and there are a couple of fairly obvious process shots. Nonetheless it was filmed almost entirely on location in New York, and it was the first Hollywood movie that really made location shooting a big issue. The filming was fraught with problems - on several occasions the camera and camera operator had to be hidden in the back of a truck so as to avoid attracting crowds of curious onlookers.

The intention was to make a movie that would look like a documentary, so as well as shooting on location the decision was made not to use name actors (apart from the star Barry Fitzgerald). The actors were mostly either unknown at the time or actors who worked mainly on stage and who would therefore not be familiar to movie audiences. The idea was to give the impression that these were real people rather than actors.

It’s by no means necessarily a bad idea but in practice the results are disappointingly dull. What seemed innovative and fresh in 1948 now seems gimmicky and contrived. The acting is mostly terrible and has the effect of drawing attention to the artificiality of the production rather than making it seem more real. And Barry Fitzgerald may have been an Oscar-winning actor but he’s entirely wrong for the movie and his hammy performance is distracting.

Even more distracting is the voiceover narration by producer Mark Hellinger. It’s too intrusive and the attempts at sardonic humour quickly become tedious and annoying.

Director Jules Dassin does not (to my way of thinking) seem to have a clear idea of what he’s trying to achieve. The tone is jarringly uneven.

Dassin claimed that Universal re-edited the movie before its release and removed much of the political content. For that at least we can be thankful to Universal. Dassin always had a tendency to bludgeon the audience with his very simplistic political views.

It’s likely that most of what is good in this film is due to cinematographer William H. Daniels. There are some stunning outdoor sequences. There are also some impressive action sequences. Another claim that has been made for the film is that it was the first crime film to feature an extended chase sequence (in fact it feature two such sequences). It’s another dubious claim. Hitchcock was doing impressive chase sequences as early as 1935 (in The 39 Steps) and there's a memorable example in his 1942 movie Saboteur. Having said that, the chase scenes in The Naked City are extremely well done.

Anthony Mann's T-Men was made about the same time and is a much more successful attempt to give a pseudo-documentary feel to a crime thriller.

The Naked City was certainly a highly influential movie and that’s really the only reason to see it.
Posted by dfordoom at 4:44 PM