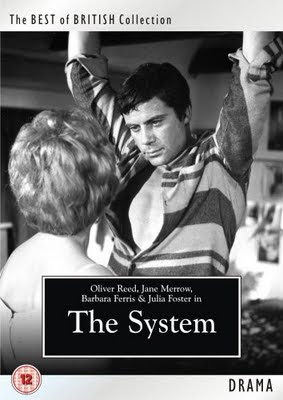 The System (later releases in the US as The Girl-Getters) is an odd British movie from 1964. Imagine a mix between an Annette Funicello beach party movie and one of those bleak British kitchen sink dramas from the early 60s but with a large dash of French New Wave influence thrown in as well and you start to get some idea of what this movie is like.

Director Michael Winner is nowadays about as far out of critical favour as it’s possible for a film-maker to be but don’t let that put you off. This is an exceptionally interesting movie. Plus it stars Oliver Reed, and he gives one of his best early performances. The strong supporting cast is a definite bonus as well.

The system of the title is a seduction system used by a group of young men to share out the women during the summer season at the seaside resort of Roxham. For the few brief months of the English summer tourists descend upon the town, including young women in large numbers. And those young women are naturally looking for holiday romances. The system makes sure the boys share the spoils evenly.

The de facto leader of this group is beachside photographer Stephen “Tinker” Taylor (Oliver Reed). As women arrive at the railway station he snaps their photographs. Then of course he has to find out where to end the photos, so the girls tell him where they’re staying. Tinker and his friends then divide them up (taking it in turns to have first choice) and set about seducing them.

Tinker is pretty pleased with his life. His job is undemanding and he gets plenty of sex. But this time one of the new female arrivals gets picked up at the station by her father in a sleek new Buick Riviera. Apparently if you were a young working class male in England in 1963 a Buick Riviera was pretty exciting. At first he’s not sure if he’s more attracted by the car or the girl. Soon it becomes all too obvious that it’s the girl.

Her name is Nicola. She’s rich and socially she’s way out of Tinker’s league. Girls like Nicola don’t marry shiftless beachside photographers. But Tinker doesn’t want to marry her, he just ants to get her into bed. And girls like Nicola have certainly been known to have holiday flings with good-looking woking-class studs. The only problem is that having slept with her he discovers that sex wasn’t all he wanted after all. Tinker is in love with her, in a serious way. Now he is not only face to face with the reality that women like Nicola don’t marry men like him, he is also forced to question his whole way of life. He thought he was cheerfully exploiting the vacationing women he took to his bed but perhaps he’d been the one who’d been taken for a ride all long.

Oliver Reed makes Tinker a complex and surprisingly sympathetic character, and he’s a character who gains in depth as the movie progresses and he discovers more and more disturbing things within himself. Things like feelings. Jane Merrow wasn’t the first choice for the role of Nicola (originally to have been played by Julie Christie) but she’s perfect. Nicola is no vulnerable innocent abroad - she’s as sexually experienced as Tinker and she’s equally happy to treat sex as merely another amusing recreational activity. At the same time she has, again like Tinker, always treated sex as a harmless game that could be played without anyone getting hurt.

A very young David Hemmings pops up as a new recruit to Tinker’s lecherous little band. Harry Andrews (as always) makes the most of his minor role as Tinker’s employer, a man as cynical in his own way as any of the beachside Lotharios.

In an interview at the time Winner talked about his movies as all being about failures at the point in their lives when their dreams are snatched away from them. That’s certainly true of Tinker who realises that everything he had believed about his life was no more than self-deception. He’s by no means the only lost character in the film. But unlike the British New Wave films of that era The System doesn’t wallow in misery and self-pity. There’s a brittle edge to it combined with a feeling of vague melancholy. Winner and scriptwriter Pete Draper don’t insist on torturing their characters to the point of destruction. There’s sadness but not necessarily hopelessness. Tinker probably won’t make much of his life but then again he might.

The film benefits from superb black-and-white cinematography by Nicolas Roeg, which also manages to avoid wallowing in excessive bleakness for bleakness’s sake.

There’s some brief nudity that caused the film major problems with the British censors back in 1964 although it was eventually passed. The whole tone of the movie was remarkably daring for a British film of that date with casual sex being treated in a matter-of-fact way.