Clark Gable and Walter Pidgeon are competing newsreel cameramen in the breezy 1938 MGM romantic comedy Too Hot to Handle.

Neither Chris Hunter (Gable) nor Bill Dennis (Pidgeon) is overly troubled by ethical considerations. They’re in China covering the Sino-Japanese War and if there’s nothing newsworthy to film well then you just need to use a little creativity. Like filming bogus air raids using a model plane (one of Hunter’s stunts).

Bill has come up with an even better one. He’s all set to film the landing of Heroic Girl Pilot Alma Harding (Myrna Loy) who has undertaken a mercy flight to bring desperately needed cholera vaccine to the area. Only there isn’t any actual cholera vaccine nor is there any actual cholera outbreak. Chris’s attempts to upstage him by getting cloose-up footage of the landing go awry when his truck causes Alma’s plane to crash on landing. Chris might be a scoundrel but he’s no coward and he saves her from the wreckage of her burning aircraft. He now has even more exciting footage than he expected but the film gets switched and his fakery is exposed. Even worse, Alma’s role in the scheme is revealed and she is disgraced and humiliated. This is too much for Chris and Bill - they might be less than entirely ethical but they hate the idea that they may have have inadvertently ruined her life. Especially when she’s trying to finance an expedition to South America to find her missing aviator brother.

They decide they’re going to make sure the expedition goes ahead but while they might be doing the decent thing by Alma that doesn’t mean they’re exactly reformed characters. They’ll still do anything for a story and the brave missing airman sounds like a promising one. The newsreel background provides plenty of action and adventure which makes this one a little different from the usual run of 30s romantic comedies. There’s also some rather pointed satire at the expense of the news media.

Gable could do this sort of thing blind-folded so it’s no surprise that he’s perfect as an unprincipled but dashing news hound. Walter Pidgeon is splendid as well. Myrna Loy is cast as a bit of an innocent victim and so she doesn’t get quite enough opportunities to show her skill in trading wisecracks. But she does get to do the Heroic Girl Flyer thing and she’s still very good. Walter Connolly and Henry Kolker provide fine support as the rival newsreel chiefs. Jack Conway handles the director’s job with his customary skill. The scrip was apparently based on the memoirs of a real-life newsreel cameraman.

Add plenty of sparkling dialogue and you have a very entertaining package. It’s also very politically incorrect, if that bothers you. 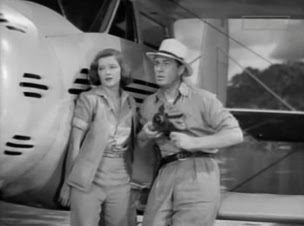 I caught this one on cable but I believe it has been released on DVD.
Posted by dfordoom at 6:56 PM