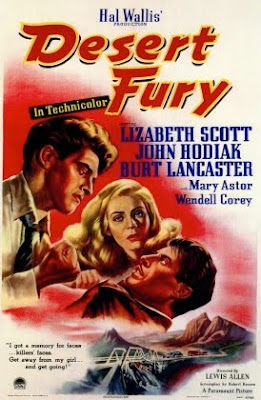 Desert Fury is a movie that once again raises the question of what makes a film noir. It takes place entirely in a small desert town and it’s in Technicolor, but this 1947 movie still has plenty of noir qualifications.

Two slightly sinister men are taking an extraordinary interest in a bridge on the outskirts of town when Paula Haller (Lizabeth Scott) pulls up behind them in her car. They have to move their car to allow her to pass. A trivial incident, but the bridge will take on considerable significance later and so will this meeting.

Paula has been away and she’s entirely sure she’s pleased to be back. The first thing that happens to her is that two women who know her cut her dead in the street. And then there’s her mother to deal with.

Her mother, Fritzi (Mary Astor), runs the Purple Sage. It’s the local gambling joint. Fritzi is a somewhat larger-than-life character who is accustomed to getting her own way. Fritzi and Paula clash, and it’s obvious that these clashes have been going on for the whole of Paula’s life.

Paula is being wooed by the town’s deputy sheriff, Tom Hamson (Burt Lancaster). Tom’s a nice guy but Paula has fallen for one of the men she met by the bridge at the beginning of the movie. Eddie Bendix is no good. He’s a gangster. Paula knows he’s no good. But she finds him exciting. He spends a lot of time with his shirt of, which of course would be enough to turn any girl’s head.

Eddie is always accompanied by Johnny. They’re partners. Johnny is the junior partner but in some ways he’s the dominant one. He fusses over Eddie like a mother. Their relationship is obviously close and perhaps just a little pathological - not in a sexual sense but there’s clearly a good deal of mutual dependence. Johnny most definitely does not approve of Eddie’s interest in Paula. Paula’s mother doesn’t approve either. All of which makes Paula more determined to have her bad boy.

There’s also the mystery of Eddie’s wife, apparently killed in slightly suspicious circumstances. Her car crashed, at that bridge that we saw in the opening scenes.

This is one of those noir films that reverses the usual gender roles. Paula is basically a nice girl. She’s just a trifle rebellious and she has a weakness for sexy bad boys. Eddie functions in the femme fatale role in this movie. He’s sexy and bad and he threatens to lead our essentially virtuous heroine astray, and it’s sex that provides the temptation for her.

So what we have is an enjoyably trashy combination of film noir and 40s melodrama, with added sparkle added by some lively performances. Burt Lancaster is solid but (unusually) he’s overshadowed by the other players. John Hodiak is sexy and sinister as Eddie while Wendell Corey is wonderfully creepy and even more sinister as Johnny.

But this is really a women’s film and it’s the two female leads who really shine. Mary Astor is a delight as Fritzi - hardheaded and ruthless but in her own ay devoted to her daughter. She’s a strong character and Astor really goes to town. Lizabeth Scott is a terrific heroine driven by rebelliousness and lust. It’s a bit difficult to buy the 25-year-old Scott as a naïve 19-year-old but aside from that it’s impossible to fault her performance.

English-born director Lewis Allen keeps a firm grip on things and the Technicolor cinematography makes the desert setting both impressive and effective.

Sadly the Region 4 DVD has no extras at all but it looks great.

This is a rather overlooked movie that I have no hesitation in recommending.
Posted by dfordoom at 5:23 PM