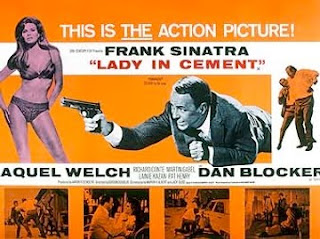 Lady in Cement was the sequel to Tony Rome, with Frank Sinatra again playing a rather seedy private eye in what is really very much a B-movie. If you accept it as a B-movie it’s decent enough entertainment.

It was made in 1968, a somewhat awkward but interesting period for American movies. This was the year the Hollywood Production Code finally died, and it was also a time when mainstream Hollywood was trying to come to terms with the whole youth culture/counter-culture/Swinging 60s thing. Exploitation film-makers like Roger Corman had already demonstrated how profitable this could be. So Lady in Cement is a slightly uneasy attempt to combine a fairly routine hardboiled private eye movie with a bit of sleaze (strip joints and brief nudity) and some youth culture (go-go dancers) and with a dash of 60s decadence (the spoilt rich girl gone bad).

Tony Rome is a Miami PI who lives on a houseboat, has lots of debts (mostly to his bookie) and an unusual hobby. He’s into scuba

diving, but not just scuba diving but scuba diving combined with treasure hunting. He’s trying to locate the wrecks of some Spanish galleons that went down off the Florida coast, laden with gold. He doesn’t find the galleons. What he does find at the bottom of the sea floor is a blonde. A very dead blonde. She’s dead on account of the fact that her feet are encased in a large concrete block. Since that’s not the sort of thing that generally happens by accident Tony figures he’d better let his friends at the Homicide Squad know about this.

The blonde’s name is Sandra, a dancer at a sleazy joint called Jillie’s. Tony gets comprehensively involved when he’s hired by a very big and very tough guy, Waldo Bronsky (Dan Blocker), to find Sandra. Waldo insists she’s alive. The trail leads Tony to the home of Kit Forrest (Raquel Welch). Kit is very very rich. And she has a hobby as well. Her hobby is getting drunk. Very drunk. Very regularly. She throws great parties, although she usually has no idea who the guests a

re. And she has a friend who’s a mobster. Also Sandra was at one of Kit’s parties the night she ended up at the bottom of the ocean, so it seems reasonable to start the investigation with her. Meanwhile Waldo is turning out to be a very eccentric client indeed.

The plot is your typical convoluted murder mystery plot. It works mostly because it has a cast that is both strong and interestingly off-beat. Richard Conte always made a good hardboiled cop, and he does well here as Tony’s buddy who happens to be head of the Homicide Squad.

This is a movie that tries to be both hardboiled and tongue-in-cheek, and Raquel Welch’s performance suits the tone of the movie perfectly. She also gets to sport some incredibly outrageous 60s hairstyles. Dan Blocker, best known as Hoss in the long-running Bonanza TV series, is the big surprise. He’s si

mply delightful, and like Welch he strikes the right balance between jokiness and seriousness. He’s both very scary and likably vulnerable.

And then there’s Sinatra, a very fine but rather underrated actor. Sinatra had a reputation for being a lazy actor, disliking the idea of ever doing more than one take, but in this case his very laid-back approach works just fine.

Major changes were happening in Hollywood at this time, and the kinds of movies that used to be made as B-movies (sci-fi movies, cop thrillers, horror movies) were about to become A-pictures, and were about to start taking themselves very seriously. And movies like Lady in Cement would be left looking like odd period pieces. It’s the sort of movie that probably wouldn’t have got made five years later but that’s part of its charm. It’s unassuming entertainment, and I rather liked it.
Posted by dfordoom at 6:48 PM