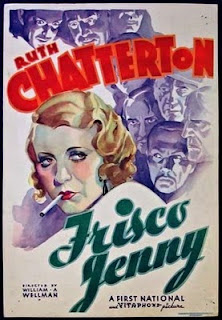 The Forbidden Hollywood Collection Volume 3 brings us six pre-code movies directed by William A. Wellman. I already had mixed feelings about this director, and Frisco Jenny only served to confirm many of my forebodings.

Ruth Chatterton is Jenny, raised by a violent bar owner in San Francisco’s notorious red-light district, the Barbary Coast. She gets herself pregnant by a piano player but things are about to get much worse. It is 1906, and San Francisco is about to be devastated by the famous earthquake. Jenny is left alone in the world to raise her son. She soon finds the financial means to do so, becoming on of the city’s most successful brothel operators.

She prospers, partly thanks to her association with crooked but charming lawyer Steve Dutton (Louis Calhern). But Jenny is still dogged by bad luck. Dutton shoots a man for cheating at dice and Jenny’s efforts to shield him bring her to the attention of the Children’s Welfare League. Faced with the prospect o losing her child she agrees with Steve’s plan to send the son off to love with some respectable friends of his. But then when she goes to reclaim the boy she can’t b

ear to tear him away from his new happy home. This is the first of a series of annoyingly self-sacrificing acts, and it marks the movie’s first descent into the perilous depths of sentimentality. It’s also the point where the plot starts to become increasingly contrived and unconvincing.

Jenny and Steve become the uncrowned queen and king of San Francisco vice, while Jenny’s son Dan grows up into a mealy-mouthed moralising do-gooder. Eventually he becomes the crusading District Attorney determined to stamp out wicked criminals like his mother. Only he doesn’t know that the infamous Jenny is his mother. And the plot just keeps getting more and more contrived, while Jenny manages to become more and more self-sacrificing. But she’s just warming up. The stage is set for a breathtakingly maudlin ending.

This is basically a turgid crime-doesn’t-pay melodrama. Jenny is certainly the heroine of the movie, despite being so wicked, but her manic self-sacrificing makes her an irritating heroine and this is not one of those pre-code movies where bad girls get to enjoy being bad girls. In this one bad girls face inevitable retribution. The film could have been made without any major changes in the post-Code era - it has more than enough punishment of uppity women to have satisfied even Joe Breen.

Ruth Chatterton does her best but the script is awful and as a result many of her scenes don’t ring true. She’s good in the early part of the movie but her performance fall apart as the movie progresses. Louis Calhern as Steve Dutton is the film’s one bright spot.

It’s unusual to see a mo

vie involving the San Francisco earthquake that has the earthquake at the beginning rather than the end of the movie. The earthquake is rendered with a mix of stock footage and rather unconvincing miniatures but it’s reasonably effective.

Wellman’s direction is generally dull. Turgid is the word I keep coming back to in relation to this movie.

However the major problems I have with this movie come down to two things. Firstly, overly self-sacrificing characters alienate me rather than making me care about them. Secondly, I couldn’t help getting the impression that I was being emotionally manipulated in a clumsy and rather phony way, that I was being instructed in how to feel rather than having the chance to make up my own mind.

I really can’t recommend this one.
Posted by dfordoom at 5:13 PM