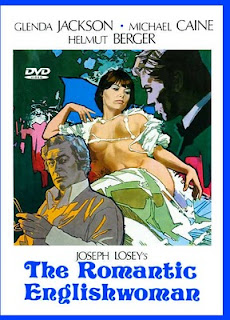 Joseph Losey’s 1975 film The Romantic Englishwoman, with a script by Tom Stoppard and Thomas Wiseman, is one of those movies that seems to have disappeared into obscurity. It’s actually a rather interesting film.

Glenda Jackson is Elizabeth, an Englishwoman who feels the need to escape from her marriage for a time. She goes to Baden Baden, makes a very brief acquaintance (nothing even approaching an affair, just a few words exchanged in a lift) with a handsome young man, and returns to her husband. Her husband Lewis (played by Michael Caine) is a writer. He imagines that she has had an affair, and this imagined affair finds its way into the book he is writing. Then, out of the blue, the young German man (played by Helmut Berger) turns up in England. The husband invites him for lunch, and soon the young man is ensconced in the spare room. 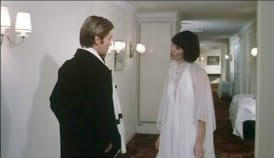 It starts as a game, with the husband trying to discover if something really did happen between Elizabeth and the young man. The young man, Thomas, appears to be completely free while Elizabeth and Lewis in their different ways seem to be captives of the lives they lead with the responsibilities and the ties that go with those lives. Elizabeth is tempted by the freedom that Thomas seems to represent, but does she really want freedom? What price would it entail? Would she be prepared to pay that price? And is Thomas really free or is he a captive of his shady past? And can Lewis disentangle truth from fiction, and can he offer Elizabeth enough to keep her? As Thomas says, Englishwomen are the most romantic. They want everything. 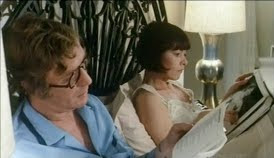 Jackson, Caine and Berger are all superb. It’s a rather low-key but engrossing movie with some rather acerbic humour. It’s romantic without a trace of sentimentality. I enjoyed it.
Posted by dfordoom at 10:01 PM