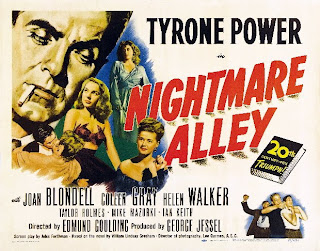 In the late 1940s Tyrone Power was trying desperately to move away from his matinee idol/swashbuckling hero image. Nightmare Alley in 1947 took him about as far from that image as possible. It’s the story of the rise and fall of a carnival mentalist who becomes a highly successful phoney spiritualist. It was based on an extraordinarily bleak and powerful novel by William Lindsay Gresham.

This was very much a personal project for Tyrone Power, who was a big enough star to get the picture made despite the opposition of Darryl F. Zanuck who thought it was far too bleak for 1947 American audien 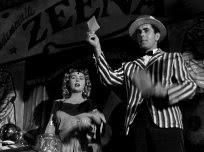 ces. It turned out that Zanuck was right. Zanuck insisted on changing the ending (and very nearly ruined the movie and destroyed the whole point of the story with a contrived sentimental ending) but the movie was a box office disaster anyway.

Tyrone Power’s performance is superb. His character, Stan Carlisle, is both an innocent and a corrupt cynical operator lacking entirely in moral scruples. Joan Blondell is magnificent as Zeena, a mentalist who teaches Stan the ropes. Blondell was always terrific at comedy but here she’s given the oppprtunity to shw her serious acting chops and she grabs that opportunity with both hands. Helen Walker is very good and rather unsettling as a 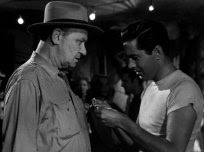 psychologist who turns out to be even more corrupt than Stan.

The movie is totally noir in its visual style – this is one of the most impressive features of the film. The carnival background and the techniques of deception are explained in fascinating detail. The commentary track is by James Ursini and Alain Silver, noted writers on film noir. They make the claim that Stan’s psychic powers aren’t completely bogus, that he seems to have some real powers. I’m very sceptical of that claim. Stan obviously is very very good at reading people. They also make the claim that because Zeena’s tarot cards seem to tell the truth that the film is suggesting that some psychic powers are real. Again I disagree. Zeena is extremely perceptive, she understands people (that’s why she can con them so effectively) and to be honest you don’t need to have psychic powers to see where Stan is headed. Their points about Stan’s being unscrupulous but not really evil are more valid. He is an interesting and complex character – he will sacrifice people to get what he wants but he isn’t really malicious.

If you can ignore the last scene it’s a great movie. Just pretend the film ends (as it should have) with the line, “Mister, I was born for it.”
Posted by dfordoom at 8:52 PM