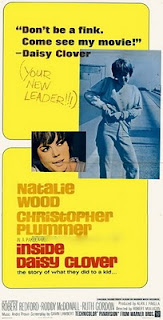 Inside Daisy Clover, directed by Robert Mulligan, follows the adventures of a teenage girl from Angel Beach, California, as she becomes Hollywood’s newest singing star. It’s set in the 1930s but this is a 1960s vision of the 1930s. Daisy’s costumes are like a Carnaby Street re-imagining of 30s fashions. Oddly enough, the blending of 1930s and 1960s sensibilities works quite well once you get used to it.

Natalie Wood was much too old to play the teenage starlet Daisy Clover. She just about gets away with it, although she’s perhaps just a touch too knowing and too sophisticated to really be convincing. Christopher Plummer is a charming but ruthless producer who makes Daisy a star, and Robert Redford is a handsome young star who falls for Daisy – a match made in heaven, if only Daisy had been a boy rather than a girl.

The things that make Inside Daisy Clover a failure are actually the things that make it a rather interesting failure. Made in 1965, it’s not quite sure if it wants to be a Hollywood movie or a European art film. There are moments that are almost surreal, but they’re not pushed far enough to make

it a Hollywood version of 8½, but the narrative is too loose to really make it work as a conventional Hollywood product. There are several sub-plots, but no real main plot, and the sub-plots don’t really go anywhere.

The relationship between Mrs Clover (Ruth Gordon) and Daisy is interesting but undeveloped. We get the feeling that there’s an interesting story behind Baines (Roddy McDowell), the enigmatic assistant

of the big-time producer, but we never find out what that story is.

Nonetheless it’s a fascinating movie and as an expose of the emptiness behind the glitter, the cynicism behind the façade of the Dream Factory, it works quite well.

The early to mid 60s is a very underrated period of Hollywood history and this is a fine example of the kinds of quirky movies that were made at that time.

It would make a good double-feature with Vincente Minnelli's similarly underrated (and equally cynical) 1960 movie about movie-making, Two Weeks in Another Town.

I caught up with this one on TCM. Both the Region 1 and Region2 DVDs are unfortunately out of print, but it's still available on DVD as part of a Natalie Wood boxed set.
Posted by dfordoom at 3:43 PM