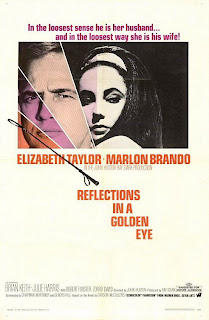 By 1967 The Production Code was starting to crumble and it had already been watered down in several important respects. Homosexuality was no longer a forbidden subject. It still had to be approached obliquely, but that actually works to the advantage of John Huston’s Reflections in a Golden Eye. Based on a scandalous 1941 Carson McCullers novella, it is after all a movie about repressed homosexuality. The indirect approach to the subject matter perfectly captures the mood of repression, of secrecy, of forbidden desires and hidden passions.

Marlon Brando plays Major Weldon Penderton, a lecturer in military tactics and leadership at an unnamed military base somewhere in the US South. His homosexual tendencies are so deeply buried he’s almost succeeded in hiding them from himself. He certainly hasn’t been able to hide his sexual problems from his wife Leonora (Elizabeth Taylor) and his failure to perform in bed is causing steadily escalating tensions. Penderton’s repressed homosexuality hasn’t just made him shut down sexually, it’s made him shut down emotionally as well. Leonara taunts him not so much because of sexual frustration, but simply because she wants to get some kind of response, any kind of response, from him. She can’t even get him to hate her.

The lack of sex isn’t a problem for her, because she’s getting plenty of t

hat from Penderton’s best buddy, Colonel Morris Langton (Brian Keith). But he has his own problems. For one thing, he’s too obsessively masculine, too afraid of his emotions, and he’s clearly very uncomfortable around his wife’s very gay Filipino houseboy. His wife has repressions of her own, which led her to cut off her own nipples with a pair of garden shears.

And then there’s Private Williams, who cares for Leonora’s horse. He’s apparently a virgin, and he’s taken to sneaking into her house to watch her sleep while fondling her lingerie. But is it Leonora he’s obsessed with, or does he want to be Leonora? And Major Penderton has developed his own obsession with Private Williams, especially after seeing him riding in the woods naked.

This isn’t so much a movie about r

epressed homosexuality as it is a movie about repressed sexuality and repressed emotions in general, and in particular with the severely abnormal atmosphere of a military camp. The fact that Huston can’t confront the issues directly makes it impossible for him to present any of the characters or relationships in a simple straightforward way. Again this turns out to be a plus, adding layers of complexity and subtlety. The viewer really does inhabit this strange military world in which nothing can be stated openly and nothing can be felt directly. Huston’s approach may be indirect, but the movie certainly doesn’t avoid the issues. There’s no subtext here. Huston decided to use an odd sepia wash on the film that mutes and transforms the colours. This was lost in earlier releases but has been restored for the DVD release, and it adds to the feel of an unhealthy distorted reality.

The Brando role was originally intended for Montgomery Clift. Personally I think that would have been far too obvious a piece of casting for such a movie, and I think Brando’s macho but tortured performance is perfect. When you see him start to disintegrate in the middle of a lecture you’re seeing a touch of Brando brilliance. Elizabeth Taylor gives Leonora considerable complexity as well. She doesn’t play her as an emasculating bitch. She can be cruel certainly, but her pain and confusion over her loveless marriage are obvious and she shows unexpected moment of sensitivity. Taylor’s performance once again highlights just how bland and uninteresting most modern actresses are. Brian Keith is the real surprise. His performance is absolutely superb.

This is an odd movie, a movie that contemporary audiences and critics (and sad to say some modern critics as well) found too perplexing and too unconventional. It’s an odd mix of subtlety and outrageousness (Taylor publicly horse-whipping Brando certainly qualifies as outrageous). A strange and unusual piece of cinematic magic.
Posted by dfordoom at 10:45 AM