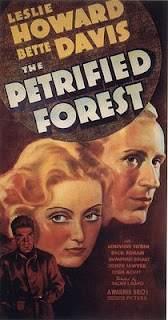 The Petrified Forest was the movie that finally put Humphrey Bogart on the map as an actor. In 1936 his career was going nowhere fast until Leslie Howard persuaded Jack Warner to give him his chance in this movie, and the rest (as they say) is history.

Leslie Howard is penniless drifter Alan Squier, a failed writer and intellectual whose wealthy wife has finally tired of him and found herself a new pet, a promising young painter. Hitch-hiking through the Arizona desert he stumbles into a gas station and diner in the middle of nowhere. The daughter of the proprietor is Gabby Maple (Bette Davis) and her dreams are all of escape to France, to civilisation. She is immediately infatuated by Alan’s charm and his intellectual pretensions. She wants to go to France with him. Alan is suffering from a very severe case of world-weariness and self-pity and doesn’t want to inflict himself on a woman. He is humiliated enough when she has to pay for his meal, and decides to skulk off into the desert to continue his wallowings in self-hatred.

At roughly the halfway point of the movie the tome changes from philosophical musings and romance to suspense and suppressed violence, with the arrival of notorious gangster and killer Duke Mantee (Bogart). They’ve stolen a car from a rich couple who find themselves held hostage at the diner, along w

ith their chauffeur, Alan, Gabby and Gabby’s her drunken old grandfather who is always boring everyone with his stories of his supposed youthful encounter with Billy the Kid. While Alan and Duke Mantee appear on the surface to have little in common, one being a passive over-sensitive intellectual and the other being a desperate and vicious man of action, Alan believe they are kindred spirits. Both are doomed, both are outsiders, both are in love with death. It appears that for both men this love affair is about to be consummated.

Seen today this movie seems incredibly stagey and outrageously talky. That it works is due almost entirely to the three leads. Leslie Howard makes Alan likeable and sympathetic when he so easily have been annoying and pompous. Bette Davis is touchingly naïve, high-spirited and amusing. Bogart, whose performance apparently owed a great deal to Leslie Howar

d’s advice on toning down his acting, gives us the first glimpse of the characterisation he would later perfect and which would make him a bona fide star.

The philosophising about the conflict between civilisation and nature, between the Old World and the New, between refection and action, life and death, etc, would have been little more than the 1930s equivalent of pop psychobabble if delivered by anyone other than Leslie Howard, It makes it sound almost profound. There’s a very 1930s atmosphere of impending chaos and social collapse, of civilisation at the end of its tether.

ss, the obviously fake backgrounds to the outdoor scenes shot on a sound stage, the confining of the action to a single room, all these things could have counted against the film but in fact they enhance its impact, giving it a stifling and artificial feel that complements the theatrical performances.

And while there’s very little action, when it does come the sudden outburst of extreme violence has a tremendous impact.

This is in many ways a landmark movie, a link between the Hollywood movies of the 30s and those of the following decade, and to a certain extent an anticipation of the American style of film noir that emerged in the 40s. And the three central acting performances are more than sufficient reason to make this a must-watch movie.
Posted by dfordoom at 8:56 PM