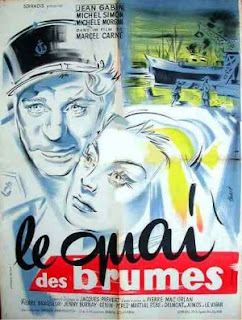 It tells the story of a man who has deserted from the French army. We’re never told his reasons, although he does admit to having done terrible things in anger. It’s likely he has also been scarred by his experiences in Indo-China. He finds himself in a seedy waterfront bar, where he meets a girl Nelly, who is as alone and despairing as he is.

He also crosses the path of a painter whose despair has gone even further, and who bequeaths him his identity. More ominously, he also encounters Lucien, a cowardly but vicious small-time gangster, and Zabel, Nelly’s sleazy and creepy guardian. He and Nelly fall in love, but they never for a moment believe that they have a future. 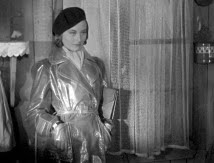 The air of fatalism in this film is overwhelming. Not one of the characters has the will to avoid their fate. The fact that the movie was made in France in 1938, with Europe heading inexorably towards a cataclysm that no-one seemed to have the will to avoid, is undoubtedly very significant.

Jean Gabin brings a certain dignity to the role of the deserter Jean. Michèle Morgan is superb as Nelly. The acting in general is low key, which also add to 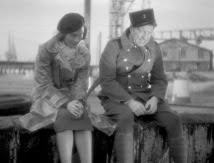 the feeling of inescapable doom. The cinematography is moody and anticipates much of the feel of film noir. Lots of fog. The ending is predictable but then tragic endings are tragic because you can see them coming but somehow the characters are unable to do anything to avert their fate.

Compared to Hollywood films of the same era Port of Shadows is much more sexually frank, and much more grownup. There are no phoney tacked-on happy endings, and no tedious moralising at the end, in this movie. No-one deserves their fate, justice has not been done, life has simply crushed a few people because that’s what life does. A cynical but also a very romantic movie. Highly recommended.
Posted by dfordoom at 4:28 PM