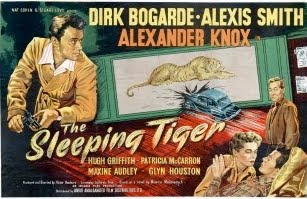 The Sleeping Tiger was the first film made in Britain by Joseph Losey, after his blacklisting in the US. Opinions vary as to whether it really qualifies as a film noir but I think it has enough noir elements to make it worth mentioning here.

The themes of sexual obsession, The screenwriters of the film, Harold Buchman and Carl Foreman, were also on the blacklist.

Losey later said he could not have made the film without the support of star Dirk Bogarde, Losey being rather down at the time and also totally unfamiliar with the British way of film-making. Losey and Bogarde made a great team and went on to make some of the finest movies ever made in Britain together. The Sleeping 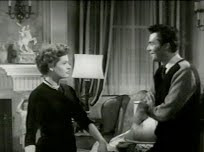 Tiger, made in 1954, can be seen as a kind of dry run for heir later collaborations – it’s not remotely in the same class as The Servant or Accident, but it’s still worth seeing.

Bogarde is a young hoodlum, Frank, who tries to rob a psychiatrist. The psychiatrist, Dr Esmond, convinces the court to allow him to have Frank in his own home for six months, receiving therapy, rather than sending him to prison. The psychiatrist has a young, attractive and rather bored wife.

Not everything in the film works. The psychiatry is a little too glib, and the plot is very melodramatic in places. What does work is the tension between Frank and the psychiatrist’s wife and the growing stre

ss on Dr Esmond. Dr Esmond represents the view that science and reason and discussion can solve all problems. The presence of Frank in the house unleashes uncontrollable sexual passions, passions that reason is powerless to deal with.

Alexis Smith is superb as the wife, gradually losing control of her life to her growing sexual obsession. The look of the movie is at times reminiscent of film noir, and both Alexis Smith and Bogarde at times fulfil the role of the classic film noir femme fatale, both at different times luring the other on to disaster.

It’s a flawed but still extremely interesting movie, and it’s worth seeing just for the sizzling chemistry between Smith and Bogarde. And for Bogarde’s performance in general.
Posted by dfordoom at 2:33 AM