Night Nurse is a very early Barbara Stanwyck pre-code film, with Stanwyck playing a woman who talks her way into a job as a nurse, with some help from the kindly doctor she (literally) ran into on the doorstep of the hospital. After completing their training Lora Hart (Stanwyck) and her best pal Maloney (Joan Blondell in yet another best friend of the heroine role) land a job nursing two sick children in a private house. The children appear to be suffering from malnutrition, and the their doctor has a rather odd treatment for this condition, which involves not feeding them.

As the health of the children steadily declines Lora becomes more and more suspicious of the set-up at the house. The house seems to be the scene of a continuous party, the doctor is evasive and hostile when questioned, the mother is permanently drunk and the chauffeur (Clark Gable) seems to be the on in charge. She starts to suspect some sinister plot. Fortunately she has one useful ally, a bootlegger she patched up with no questions asked when he turned up at the hospital with a bullet wound. He might be 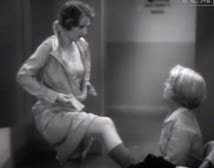 a gangster, but he never forgets a pal, he’s rather sweet on Lora, and really he’s a big old softie. He doesn’t even like killing people, so he always gets someone else to do it for him. But can Lora act quickly enough to save those kids?

Unlike Stanwyck’s other notorious pre-code movies, such as Baby Face and Ladies They Talk About, Night Nurse doesn’t make the pre-code content too overt. It’s more that the whole tone of the film is pre-code. It’s the sort of movie that the Code wouldn’t have forced cuts on - they’d have simply told the studio the entire movie was unacceptable! The heroine has to rely on a bootlegger to save the day, and he’s not a reformed bootlegger. And she’s pretty keen on him too, and she doesn’t mind that he’s a criminal. The expose of outrageous med 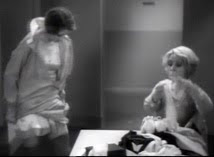 ical malpractice is also something that would probably not find favour in the post-code days.

The whole atmosphere of the film is wonderfully sordid and corrupt, and the legitimate authority figures are mostly ineffectual and unwilling to get their hands dirty. If a girl gets in a jam she’s better off turning to her hoodlum boyfriend for help than to the authorities. Stanwyck is always fun in her pe-code movies, and she and Blondell are delightful together. Gable isn’t the lovable rogue this time, just a vicious thug with a sadistic streak. 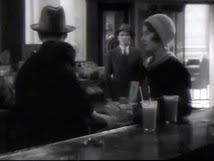 ed as an excuse to show actresses in their underwear, and Night Nurse includes one of the all-time classic gratuitous undressing scenes, and manages to combine it with just the faintest hint of additional wickedness by having Joan Blondell (playing the heroine’s best friend as usual) always willing to lend a hand to a pal by helping her to get undressed! It’s the kind of delightfully salacious scene that makes pre-code movies so much fun.

Night Nurse is another pre-code gem, and of course it’s a must for Stanwyck fans.

Night Nurse is included in the TCM Archives - Forbidden Hollywood Collection, Vol. 2 DVD boxed set, although I caught up with it on TCM in Australia.
Posted by dfordoom at 9:25 AM