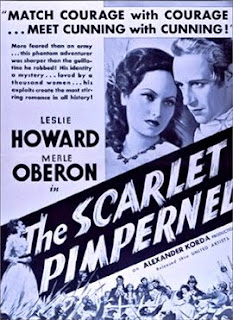 Having decided that I my have sadly underestimated Leslie Howard as an actor I’m now watching anything of his that I can get my hands on. Starting with The Scarlet Pimpernel. This was the the first of countless TV and movie adaptations of Baroness Orczy’s classic tale of adventure and heroism, and I don’t think it’s ever been bettered. By the standards of the 1930s British film industry it’s a lavish production with a strong cast.

This is pure melodrama, and if you’re going to enjoy it you have to accept that. You’re supposed to boo whenever the dastardly Chauvelin makes an appearance. You’re also supposed to feel that by Gad, it makes one proud to be an Englishman. Which can be difficult if you’re not an Englishman to start with.

The story of course concerns a foolish and foppish Englishman, Sir Percy Blakeney, who is in reality the Scarlet Pimpernel, a dashing and terribly b 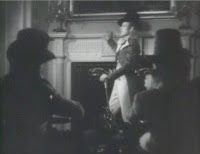 rave hero who rescues doomed aristocrats from the clutches of the wicked French revolutionaries. His beautiful wife Marguerite is a Frenchwoman who has a mysterious involvement with the cruel and villainous Citizen Chauvelin (Raymond Massey giving an entertaining pantomime villain performance). Sir Percy is assisted by a group of brave and devoted English noblemen, all determined to show these damned foreigners a thing or two.

Leslie Howard gives a bravura performance as the Pimpernel. Nigel Bruce is delightfull 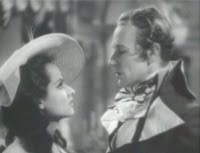 y vain, pompous and foolish as the Prince of Wales. Raymomd Massey doesn’t actually twirl his moustaches as the perfidious Chauvelin, but you know he would if he could.

It’s the sort of thing that just begs to be sent up, and was in fact sent up very successfully in 1966 in one of the best of the Carry On movies, Don’t Lose Your Head. It’s all very silly, but it’s done with panache and it still works as a ripping Boys’ Own adventure yarn with some romance as well.

I got this movie as part of a three-movie DVD of of 1920s and 1930s adventure movies. It’s an OK DVD transfer, but not fantastic.
Posted by dfordoom at 9:27 PM