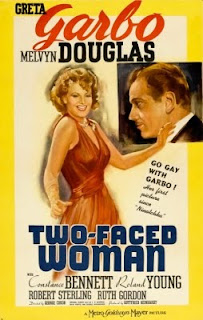 Given that it marked her final screen appearance Two-Faced Woman is generally regarded as the box-office bomb that sank Greta Garbo’s career. While it’s certainly a long way from being her best movie it’s actually nowhere near as bad as its reputation would suggest.

The big problem for both Garbo and MGM was that Garbo’s movies had always been much more popular in Europe than in the US. They did reasonably good business in the US but it was their huge success in Europe that made them major money-spinners for the studio. The outbreak of the Second World War effectively cut off the European market for Hollywood movies. MGM managed to persuade themselves that they had to change Garbo’s image and change the type of movies she made. Garbo’s somewhat unexpected comedy success with Ninotchka in 1939 led them to believe that comedy was her future. And teaming her up once again with her Ninotchka co-star Melvyn Douglas seemed like an even better.

Unfortunately Two-Faced Woman failed to repeat Ninotchka’s success. Garbo became convinced she was destined to spend the rest of her career in second-rate comedies and that she just wasn’t going to get the roles that really suited her any more, and decided that she’d prefer not to make any films at all. She was always willing to make a comeback if offered an interesting enough part but it just never happened. But if you can forget that this is the movie that ended her career, and if you 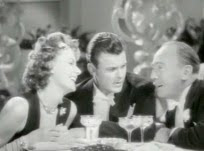 avoid comparing it to Ninotchka, then there’s actually quite a lot to enjoy in Two-Faced Woman.

The basic idea is certainly promising. Melvyn Douglas is wealthy magazine publisher Larry Blake. While on holiday he has a whirlwind romance with his ski instructor Karin (Garbo). They marry, but almost immediately it becomes apparent that they want very different things out of life. She wants the outdoor life, he wants New York. She craves a quiet life while he craves excitement and constant activity. They quarrel, he departs for New York, and although he promises to return he finds more and more excuses not to. Finally she sets out for New York herself, and inspired by an idea planted by his assistant Miss Ellis she changes her look and pretends to be her own twin sister. A twin sister who is the complete opposite of Karin - a fun-loving party girl. Naturally Larry falls in love with the sister not realising it’s his wife. There are more plot twists as the deception shifts from one party to the other. 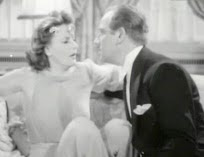 It was surprisingly very controversial at the time, being condemned by the Catholic Legion of Decency for its somewhat irreverent attitude towards marriage. There’s also at least a suggestion that the twin sister is not just a party girl but may in fact be the kind of woman who sells her sexual favours for money. Not exactly a hooker, but possibly more like an old-fashioned courtesan.

Garbo handles the comedy reasonably well. It’s not an outrageously funny movie, but it’s pleasant and amusing. The studio’s attempt to give her a less exotic and more American image was probably their biggest mistake. Ninotchka worked because it used Garbo’s exoticism to its advantage. But Two-Faced Woman is certainly harmless fun and it’s worth a look.
Posted by dfordoom at 3:16 PM