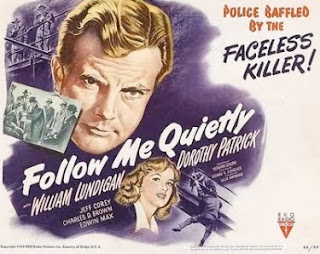 Follow Me Quietly is a 1949 RKO programmer that sometimes gets listed as an example of film noir, probably on the strength of boasting Anthony Mann as one of the writers. It’s not film noir at all, but in its own way it’s an interesting little movie, mostly because the plot is completely insane.

A crazed vigilante killer known as The Judge has committed a series of murders, always on rainy nights. Detective Lieutenant Harry Grant (William Lundigan) is baffled. To add to his problems, he has a Feisty Girl Reporter (Ann Gorman, played by Dorothy Patrick) following him around trying to get a story. He doesn’t like reporters, not even attractive Feisty Girl Reporters. But of course you know the big lunk will fall for her in the end, 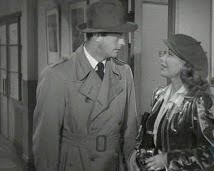 because the Hardbitten but Dedicated Cop and the Feisty Girl Reporter always have to get together.

Grant comes up with an ingenious scheme to trap the killer. They will prepare a dummy that looks just like The Judge. Except they have no idea what The Judge looks like, so the dummy has no face. Luckily witnesses in crime B-movies can easily recognise killers by looking at photographs of faceless dummies.

And it turns out The Judge reads the same true crime magazine that the Feisty Girl Reporter works for! This is inde 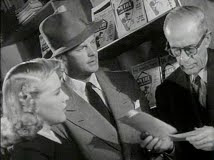 ed a lucky break. After all the magazine only has a few hundred thousand readers, so now finding the killer will be easy. And this connection will help to bring the Hardbitten but Dedicated Cop and the Feisty Girl Reporter together.

Dorothy Patrick is quite good. She doesn’t take the material too seriously, and she has fun being plucky and smart and determined. But not too smart, because she knows that girls who are too smart risk losing the Hardbitten but Dedicated Cop. And she doesn’t really want to be a Feisty Girl Reporter - she really wants to find a nice guy with whom she can settle down and get married. William Lundigan takes it all very seriously, but that kind of works with Dorothy Patrick’s slightly tongue-in-cheek performance.

The plot is amazingly silly but if you accept this as being a pure B-movie then it’s fairly entertaining. And it has some great cliche-ridden hardboiled dialogue.
Posted by dfordoom at 12:10 AM