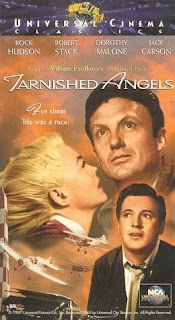 Douglas Sirk’s 1958 movie The Tarnished Angels was based on a minor novel by William Faulkner.

This could be the story that makes him the great journalist he always believed he could be, but never quite became. He discovers that underneath the glamour of air races and stunt flying there’s absolutely nothing. These people are dead inside. If they ever knew how to be happy it’s something they’ve long since forgotten. There’s a particularly unhealthy romantic triangle going on between Roger, LaVerne and Jiggs, and it’s festering because their way of dealing with emotions is to pretend 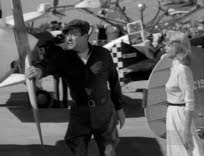 they’re not there. There are things that all three desperately need to say, but none of them are saying anything at all.

Sirk uses the background of mardi gras in New Orleans subtly but effectively, with masks being used to suggest the alienation and the falseness of the lives of the protagonists. Devlin finds himself drawn to these people even as he’s appalled by them (and presumably appalled also by the parallels to his own life and his own broken dreams).

Rock Hudson is amazingly good as Devlin. He was simply the perfect actor for Sirk 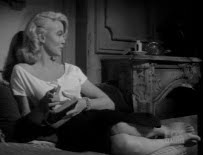 ’s purposes. Dorothy Malone gives another powerful performance, similar to the one she gave in Sirk’s Written on the Wind – she’s all suppressed hysteria and emotional and sexual frustration. Robert Stack was a terrible actor, but he also found his niche in Sirk’s films and his performance works. Jack Carson is terrifyingly hopeless and helpless as Jiggs, a man whose entire life has amounted to nothing at all. 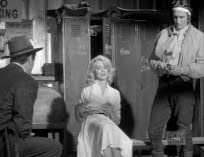 e use of black-and-white instead of the incredibly lush Technicolor palette usually associated with his 1950s output is a surprising but very effective choice here.

Of the various Sirk movies I’ve seen (including Written on the Wind which is generally regarded as his masterpiece and is certainly a magnificent film) this may well be the greatest of all. It’s melodrama, you can see the plot unfolding with a certain degree of inevitability, and the dialogue is gloriously overwrought and overheated. In the hands of a lesser film-maker it could have been a disaster; in Sirk’s hands it’s a masterpiece. A must-see movie.
Posted by dfordoom at 11:30 AM