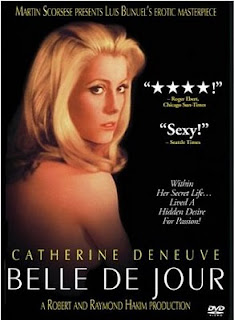 Luis Buñuel’s 1967 film Belle de Jour is the story of Séverine (played by Catherine Deneuve) and her double life.

Séverine is married to a wealthy, handsome, young doctor. She loves him, but she can’t bear to have sex with him. The film continually cuts between Séverine’s real life and her fantasy life, and her fantasy life makes it clear why she won’t have sex with him – Séverine wants to be dominated and humiliated, and her husband is just too nice and too clean to turn her on. Her name is obviously a reference to Severin, the hero of Leopold von Sacher-Masoch’s “Venus in Furs”.

She lives a double life in the sense that her fantasy life is more real and more fulfilling to her than her real life, but then after a chance remark by a friend leads her to a Paris brothel she starts living a real double life – prostitute by day, virtuous wife by night. Inevitably she finds that eventually her two lives collide. If this was a Hollywood film you could pretty much predict the ending, but this is most definitely not a Hollywood film.

Buñuel is not interested in moralising (and he has some fun satirising the hypocrisy of middle-class morality), he simply views his subject matter with amusement. Catherine Deneuve is superb, and manages to make Séverine completely believable.

This is an intelligent, incisive, amusing and non-judgmental look at sex, and it’s a very entertaining film. Highly recommended.
Posted by dfordoom at 8:32 PM