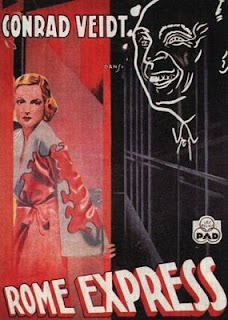 It’s always been my firm belief that you can’t really go wrong with a suspense movie set on a train. If the train happens to be an old-fashioned one with compartments and it happens to be travelling through several different European countries and there’s a hint of international intrigue in the air, then you have a sure-fire winner. Rome Express is a movie that provides ample confirmation of this theory.

This stylish 1932 British thriller pretty much establishes the formula for all subsequent suspense-on-a-train movies. It mixes mystery with humour, and a dash of romance. It has the requisite assortment of passengers. There’s a movie star, a gang of international art thieves, the obligatory garrulous bore for comic relief and the equally obligatory eccentric old lady. There’s a mild-mannered entomologist who turns out to be something quite different, and a couple of lovebirds heading off for a weekend of adultery in the sun.

The strong cast is head 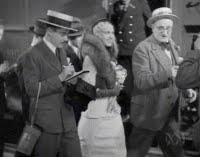 ed by Conrad Veidt as an archetypal charming but sinister villain, and very entertaining he is too. Frank Vosper is delightful as M. Jolif, a dapper and deceptively efficient French detective. It will require all his resourcefulness to untangle the complex web of lies told by the various passengers on the Rome Express. Even the law-abiding passengers have their own reasons for being economical with the truth.

The plot involves a stolen painting, and attempts by the thieves to double-cross each other, attempts culminating in murder. Meanwhile two young couples find themselves mixed up in complicated romantic entanglements, while other passengers find themselves re-assessing their lives and 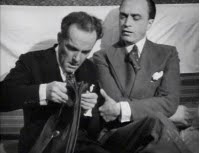 hoping for an opportunity to make fresh starts.

The pacing is taut and the tension is ratchetted up by constant cross-cutting. The screenplay is by Sidney Gilliat, who also worked with such luminaries of the British film industry as Alfred Hitchcock (on another illustrious train movie, The Lady Vanishes) and Sir Carol Reed.

This is a movie that looks surprisingly modern, with Walter Forde directing with flair and confidence, and coming up with some nifty camera angles. A very entertaining and thoroughly enjoyable movie. Highly recommended.
Posted by dfordoom at 3:16 PM