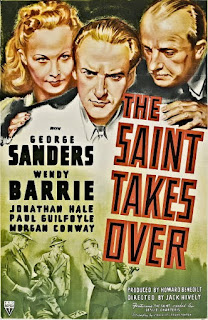 The Saint Takes Over, released in 1940, was the fourth of the popular RKO B-movies featuring George Sanders as amateur crime-fighter Simon Templar. It was the first of these movies not to be based on one of Leslie Charteris’s stories.

What makes The Saint so successful as a literary character is that he has a dark side and he has a shady past. He was in fact a successful criminal, but a criminal with a strong moral code. This moral code has caused him to switch sides and he’s now more or less on the side of the law, tracking down evil-doers as a kind of hobby. He can afford to do this because his own criminal activities were profitable enough to leave him financially secure. But he’s still not averse to making money in slightly dubious ways, and he’s still regarded by the police as a criminal.

When it came to both the RKO movie series and the later 1960s British TV series this dark side had to be toned down somewhat. This weakened the character a little, which made it very important to have the right actor playing the role, someone who could still suggest a certain degree of moral ambiguity and not make The Saint too virtuous. George Sanders was of cour 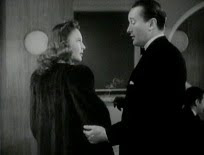 se an absolute perfect choice, and with all due respect to Roger Moore Sanders remains the best-ever Simon Templar.

The Saint Takes Over opens on an ocean liner, with Templar rescuing a woman who was about to be fleeced by a group of card sharks. Simon is rather taken by the woman, but when the ship docks she disappears. But she will re-appear. Arriving in the United States The Saint finds himself drawn into a mystery involving a series of murders of prominent racketeers. The Saint’s old acquaintance Inspector Henry Fernack has been set up by these gangsters and thrown off the police force for accepting bribes. Templar finds the situation both intriguing and amusing, in fact just the kind of adventure he enjoys.

RKO always did crime B-movies particularly well. They had a team of solid technicians who could produce exactly the right kind of gritty feel, and the right mix of the so 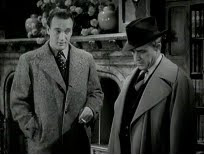 rdid, the sleazy and the glamorous.

Sanders is of course superb.

The plot doesn’t try to get too clever, which would distract from the atmosphere and from the brilliance of Sanders’ performance. There’s enough hardboiled dialogue to keep any crime movie fan happy.

And the great secret of the classic Hollywood B-movie was that the requirement to keep the running time below 70 minutes meant that the pacing had to be brisk, and the lack of padding makes it easy to maintain the right level of tension.

The Saint Takes Over is undemanding light entertainment, but with more than enough style and wit to provide plenty of entertainment.
Posted by dfordoom at 6:11 PM