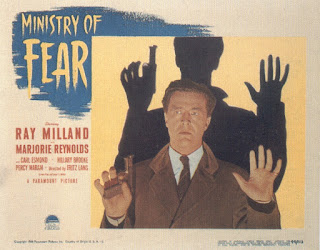 Ministry of Fear, released by Paramount in 1944, is not one of Fritz Lang’s more admired American movies. Lang himself was not entirely happy with it. In spite of all that I’m going to go out on a limb and describe it as a minor Langian masterpiece.

Lang admired Graham Greene as a writer and was initially enthusiastic when approached by Paramount to film Greene’s 1943 novel Ministry of Fear. Lang was usually very careful to make sure that any contract he signed would give him the right to make any alterations to the script that he considered necessary. On this occasion he neglected to take that precaution and then found screenwriter Seton I. Miller to be annoyingly resistant to making the changes that Lang sought. That may account for Lang’s later lack of enthusiasm for the movie, and possibly also for the relative disdain critics have displayed towards it. Regardless of all this it’s obvious when you watch the movie that Lang put a great deal of thought into the making of the movie. It includes some of Lang’s most effective visual set-pieces.

As the film opens Stephen Neale (Ray Milland) is about to be released from what we assume to be a prison. As he passes through the gate on his way out we find that it is in fact a mental hospital. At this stage we have no idea why he had been confined in such a place and we will not be given that information until well into the movie. 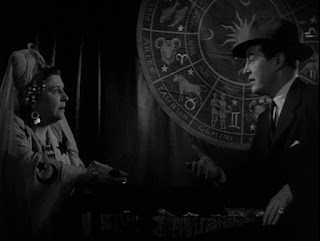 While waiting for his train to London Neale wanders into a fête run by a wartime charity, the Mothers of Free Nations. He has his fortune told and wins a cake. His winning of the cake seems to cause a surprising amount of consternation among the other attendees of the fête. This strikes Neale as slightly curious but he is too anxious to get to London to worry about such trifles. He boards his train and this is the occasion for the first of Lang’s virtuoso moments in this film. A blind man enters Neale’s compartment and now Neale discovers that the cake he has won is a great deal more than just a cake.

That cake lets Stephen Neale in for a good deal of trouble. He soon starts to suspect that the Mothers of Free Nations might not be quite the innocuous charity it appears to be. When he meets the people who run the charity, Willi Hilfe (Carl Esmond) and his sister Clara (Marjorie Reynolds), his suspicions are somewhat abated. They are Austrian refugees and seem to be harmless enough. In fact Neale is rather taken by Clara. 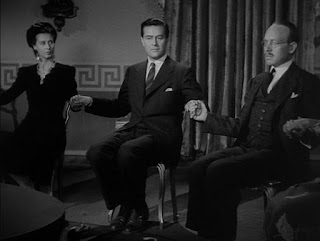 Nonetheless Neale is determined to find out why a cake has caused him so much trouble and has almost cost him his life. He wants to track down the clairvoyant from the carnival and this quest leads to a séance, and the séance scene is handled brilliantly by Lang. It also introduces Dan Duryea as Cost, a character who will play some unexpected parts in the story.

Associated with the Mothers of Free Nations is a psychiatrist named Dr Forrester (Alan Napier). He has written a book offering a psychoanalytical examination of Nazism. Neale is rather puzzled by Dr Forrester and he is increasingly concerned about being shadowed by a rather sinister unidentified figure. 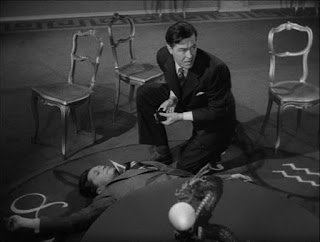 The audience has seen all these events from Neale’s point of view and knows no more about what is really going on than he does. On the other hand the audience has very incomplete knowledge of Stephen Neale himself and when snippets of information about him are revealed they may be inclined to be as suspicious of him as he is of the other characters in the story, especially when the reasons for his incarceration in the asylum are revealed.

The one thing that seems to be beyond doubt is that espionage is involved, but in this movie nothing is really beyond doubt. Everything and everybody seems equivocal (hardly surprising when the source material is a Graham Greene novel). It’s all shades of grey. Anyone could be guilty but we can’t be sure exactly what they might be guilty of.

The resolution of these various doubts will afford Lang the opportunity for a series of stunning visual tours de force. 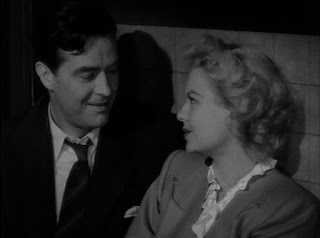 Whatever reservations Lang may have had about Miller’s screenplay it does capture much of the distinctive Graham Greene flavour of the novel, although Lang’s handling of the material possibly contributes even more to the very effectively ambiguous feel of the movie.

Ray Milland is ideally cast. He had the ability to be very likeable whilst also leaving us in some small doubt about whether the characters he played were really what they seemed to be. Marjorie Reynolds is an effective female lead. Dan Duryea has little screen time but as always makes his presence felt playing a decidedly but subtly sinister rôle. The supporting is uniformly impressive. 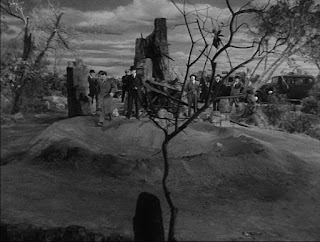 The amount of time and effort Lang was able to put into his visual set-pieces makes it obvious that Paramount had provided him with a rather generous budget. The movie has  the definite feel of being a movie shot entirely in the studio and on the backlot but that was true of most of Lang’s best movies of the 40s (a feature that is particularly evident in Scarlet Street and Woman in the Window). I feel this was very much to the advantage of his movies of this period, giving them a wonderfully stifling claustrophobic feel but even more importantly giving them a deliberately artificial feel that adds extra layers of ambiguity.

Optimum’s Region 2 DVD offers no extras but a superb transfer.

Ministry of Fear is often dismissed as a lightweight Lang movie but it is nonetheless very Langian and is also one the most visually impressive of his American movies. There are enough layers of complexity and ambiguity to satisfy any reasonable Lang fan. And it’s also an extremely entertaining movie. Very highly recommended.
Posted by dfordoom at 12:25 AM