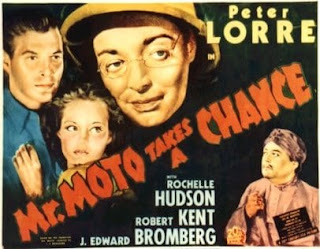 Mr Moto Takes a Chance was the fourth of the eight Mr Moto films made by 20th Century-Fox in the late 1930s. They were B-movies but they were extremely popular and they provided Peter Lorre with the launching pad for his much more successful career with Warner Brothers in the 40s.

Lorre was initially rather pleased by the opportunity these films offered him to play a hero for a change but he became increasingly frustrated by Fox’s refusal to increase his salary. Given the commercial success of the films he felt, quite reasonably, that he deserved a salary that reflected that success. He was also frustrated by Fox’s unwillingness to offer him the range of roles that he needed in order to establish himself as a genuine Hollywood  star.

The Mr Moto movies might seem to bear a superficial resemblance to the equally successful Charlie Chan and Mr Wong movies but in fact they were rather different. Mr Moto does play the sleuth at times but in reality he is a more of a secret agent than a detective. The films themselves fit more into the thriller genre than the mystery genre and unlike Charlie Chan and Mr Wong Mr Moto is a genuine action hero. He may look like a harmless and rather bookish Japanese gentleman but villains who make the mistake of taking him at face value often have cause to regret their error of judgment when the discover his rathe formidable skill at jiu-jitsu. There is also a touch of ruthlessness to Mr Moto that sets him apart from Charlie Chan and Mr Wong. 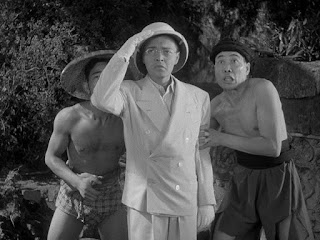 Mr Moto is also a slightly ambiguous character. He is an agent of the Japanese government who seems to find himself working unofficially in the interests of the British and American governments but there is always a touch of ambivalence as to where his ultimate loyalties lie.

Mr Moto Takes a Chance emphasises the secret agent rôle of Mr Moto. The beginning of this film sees Moto working as an archaeologist in French Indochina, but the audience will have little doubt that this is merely a cover. When famed American aviatrix Victoria Mason (Rochelle Hudson) is forced to bale out of her stricken aircraft she finds herself in the tiny (mythical) kingdom of Tong Moi. The audience is well aware that her plane crash was no accident but was engineered by her although her purpose remains obscure. Mr Moto also does not know what she us up to but he certainly strongly suspects that her crash was no accident.

Victoria gets mixed up with two American newsreel cameramen, Marty (Robert Kent) and Chick (Chick Chandler), and they all become embroiled in a plot being hatched by the local high priest Bokor (George Regas). She also finds herself lined up to be the next wife of the  Rajah (J. Edward Bromberg). All three Americans are soon in trouble but Mr Moto has not been idle. He has been putting his famed skill at disguise to good use and manages to extricate Marty, Chick and Victoria from a number  of rather nasty situations. 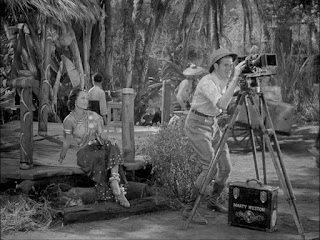 The presence of a senior secret agent like Mr Moto in Tong Moi is no accident either. His presence suggests that there is something far more significant and far more sinister going on in Tong Moi than a mere attempt to unseat a petty princeling.

Whoever is pulling the strings and for whatever purpose it is soon clear that they will not shrink from murder, or even from a series of murders. Poison darts are flying about thick and fast and Mr Moto will need all his skills just to stay alive, much less accomplish his mission. And as well as carrying out his mission he will have to rescue the three Americans. That’s not part of his mission but Mr Moto is too much of a gentleman to allow a lady’s life to be endangered or to allow two bungling but well-meaning newsreel cameramen to be wantonly murdered. 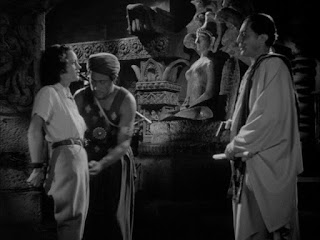 There’s plenty of action (this is after all a spy thriller) and the story is an entertaining one handled with some skill by director Norman Foster. The sets are quite elaborate, being presumably (as was the so often the case with B-movies made by the major studios) left over from an earlier and bigger Fox production. The production values are quite high by B-movie standards and the action sequences are quite well done. This is a B-picture but it’s a fairly classy B-picture.

The curse of Hollywood B-movies of this era is the obligatory comic relief, provided in this case by Chick Chandler. He isn’t funny but fortunately he isn’t excessively irritating and the comic relief elements are kept within reasonable bounds and don’t really harm the movie. George Regas is an adequately menacing villain while J. Edward Bromberg has fun as bombastic but surprisingly shrewd and cunning Rajah. Robert Kent as Marty is bland but harmless. Rochelle Hudson makes an engaging and rather feisty heroine. 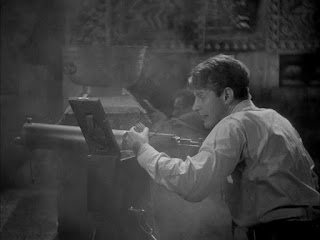 Peter Lorre is in fine form. He is always charming but we are never allowed to forget than underneath his amiable exterior Mr Moto is not a man to be trifled with. It’s difficult to think of a more unlikely action hero than Lorre but he carries off the rôle with ease.

This movie is one of four in the first of the two Mr Moto DVD boxed sets issued by Fox. The transfer is superb and the movie looks terrific. Extras are not overly lavish but they do include a brief but fairly informative documentary on Peter Lorre’s life and career. Fans of the Mr Moto movies have no cause for complaint with Fox’s treatment of these movies.

This is my favourite B-movie series from that era. Mr Moto is a much more offbeat and interesting character than the general run of B-movie heroes and Lorre is of course a considerable more accomplished actor than the usual stars of such movies. Mr Moto Takes a Chance is splendid entertainment and is highly recommended.
Posted by dfordoom at 9:56 PM