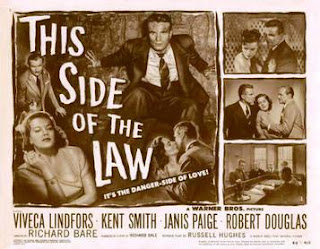 Warner Brothers have come up with a few interesting film noir items in their made-on-demand Archive series, and This Side of the Law certainly qualifies as interesting.

This 1950 Warner Brothers offering is perhaps more of a gothic thriller than a true film noir but it has enough noirish elements to be worthy of consideration by noir fans.

We start in true noir style with the hero in a great deal of trouble telling us how he got into the mess in a flashback that occupies most of the movie’s running time. David Cummins (Kent Smith) was a vagrant who got a lucky break. At least he thought it was a lucky break. Lawyer Philip Cagle (Robert Douglas) pays Cummins’ fine for vagrancy and offers him a job. All he has to do is be another man for a week. 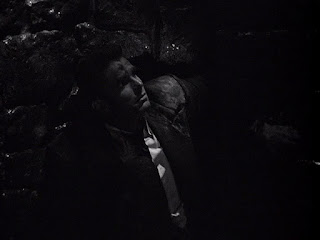 Cummins happens to be the splitting image of missing millionaire Malcolm Taylor. Taylor has been missing for seven years. In a few more weeks he will be declared legally dead. Cagle doesn’t want that to happen. Cummins will take his place.

Cummins turns up at Taylor’s palatial but very gothic mansion, Sans Souci. He manages to fool Taylor’s brother Calder and Calder’s wife Nadine. He even manages to fool Taylor’s wife Evelyn. So far so good, but Cummins soon discovers that Sans Souci is not a happy place. No-one seems to be pleased to have him back and no-one at the house seems to like anyone else there. Cummins starts to piece a few things together. Malcolm Taylor had been having an affair with Nadine. His relationship with his brother Calder had been uneasy to start but this affair had been the icing on the cake. 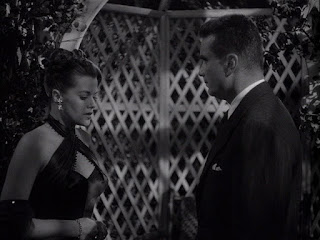 Evelyn hadn’t known about Taylor’s affair with Nadine but she knew about his other affairs and the marriage had clearly been very shaky indeed. Now Evelyn finds out about Malcolm and Nadine and a tense situation gets a great deal tenser. While this is happening Calder is being slowly consumed by jealousy. And of course they all wanted Malcolm’s money.

What Cummins hasn’t figured out yet is why exactly Cagle wanted him to impersonate Taylor. Cagle claimed he was acting in Evelyn’s interest and his explanation sounded plausible enough. Cagle also wanted to find out exactly what had been going on at Sans Souci, and exactly why Malcolm Taylor disappeared. Cummins is starting to get an inkling of what the real situation is and it puts him in a difficult position. 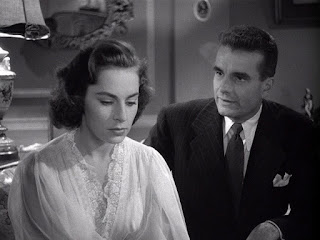 Cummins is your typical noir hero. He’s a decent enough guy and he really didn’t want to get involved in such a messy situation but he really needed the $5,000 Cagle offered him to impersonate Taylor. Now he’s in over his head and things are threatening to get out of control. He’s playing a perilous game with some very dangerous players.

Kent Smith had a very long career from the 1930s to the 1970s but never quite made it as a star. His leading roles were always in B-pictures. It’s difficult to understand why this was so. He had the looks and he had the talent. Perhaps the explanation is simply that he never got that breakthrough rôle that might have propelled him to stardom. In this movie he shows that he had what it takes to be a fine film noir lead. It’s a nicely understated performance.

Viveca Lindfors does well as Evelyn, but it’s Janis Paige who gets the juicy female rôle as the scheming femme fatale Nadine and she makes the most of it. 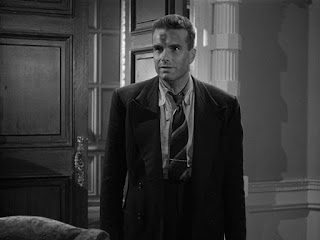 Russell S. Hughes’ screenplay (from a story by Richard Sale) is pefectly serviceable. Director Richard L. Bare had a long if undistinguished career but he keeps the action moving along. There are no wasted scenes and Bare and cinematographer Carl E. Guthrie  capture the right atmosphere, a mix of film noir and gothic. The limited budget necessitated the use of matte paintings for some of the exterior shots of the cliff-top mansion but I always feel that the obvious use of matte paintings actually enhances a gothic feel, and that’s certainly the case here. Bare makes effective use of the classic gothic device of having key scenes played out on a treacherous cliff top. It’s an unoriginal idea but it works and it adds to the menacing gothic flavour.

The Warner Archive made-on-demand DVD offers a fine transfer although as usual in this series there are no extras.

This Side of the Law is an unassuming but thoroughly satisfying B-movie. Recommended.
Posted by dfordoom at 9:20 PM