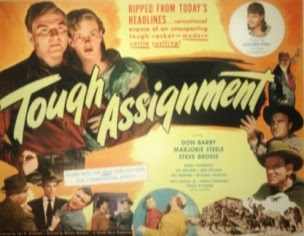 Lippert Pictures made some fairly entertaining crime B-movies in the late 40s and early 50s. They also made a few movies like Tough Assignment (1949) which really can only be described as utter dreck.

The idea has some promise - a newspaper reporter investigating cattle-rustling, which is at least an unexpected subject for a 1949 movie set in contemporary times.

Don Barry is reporter Dan Reilly, on his honeymoon with new wife Margie (Marjorie Steele). He’s taking some snapshots and accidentally gets a photograph of some hoodlums leaving a butcher’s ship after beating up the proprietor. Why on earth would a small neighbourhood butcher be a target for mobsters? The answer is black market beef and cattle rustling. Reilly has stumbled upon a story and he and Margie are determined to follow it through. The only problem is that the hoodlums know he’s on the story so he has to get the information he needs before the hoods get him.

Director William “One-Shot” Beaudine was famous for his ability to get the job done and get it done quickly and cheaply. The job he does here is technically competent but entirely lacking in any kind of inspiration or imagination. It’s strictly by the numbers. 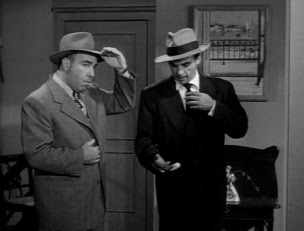 The real problem is Milton Luban’s screenplay. It’s obvious that Luban never met a cliché he didn’t like. Unfortunately that’s all we get. That’s bad enough but the story just makes no sense. How can you go undercover to get a story on a crime gang when the gang already knows who you are, what you look like, who you work for and what you’re up to? The script’s attempts to gloss over this difficulty only make the whole thing seem embarrassingly amateurish. Every plot point is painfully obvious. There is zero suspense and zero excitement.

Maybe that doesn’t matter since the movie is clearly aiming at being a light-hearted comedy-drama rather than straight drama, but in this case the comedy is not merely puerile and unfunny it’s also as excruciatingly obvious as the drama. You can pretty much predict exactly what each character is going to say next and what the next lame gag will be. 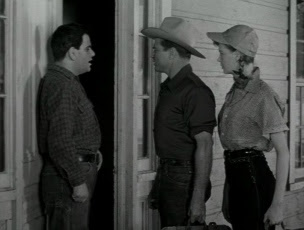 The main source of comedy here is Sid Melton as crooked ranch hand Herman. Sid Melton may well be the least amusing and most irritating comic actor in history. OK, he certainly has some stiff competition in that field, but I’d still rank him very near the top. If you needed an actor who could be relied upon to extract absolutely zero humour from any situation then Sid Melton was your man.

Don Barry seems barely awake most of the time. The supporting cast is uniformly awful. The one bright spot is Marjorie Steele who manages to be cute and peppy and likeable in a rôle that could easily have been as irritating as everything else in this movie. Her performance is so bubbly that it effectively kills any chance the movie has of being an actual crime thriller but at least she’s moderately entertaining and actually knows how to deliver a comic line properly. 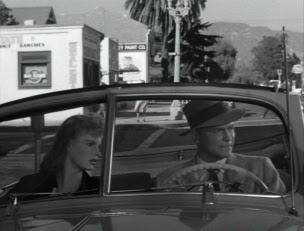 This movie’s inclusion in VCI’s Forgotten Noir DVD set is puzzling to say the least since there is not the slightest hint of any noirness here. Absolutely none. The transfer is quite acceptable. The Forgotten Noir set itself is worth picking up since it’s ridiculously cheap and includes a couple of interesting movies.

It’s difficult to think of any movie that has quite so little to offer as Tough Assignment. It cannot even be described as a time-killer. You would get more entertainment from watching paint dry. Buy the set by all means but for pity’s sake avoid this particular movie.
Posted by dfordoom at 12:27 AM