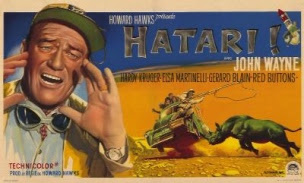 Hatari! is a lavish 1962 comedy adventure romp from Howard Hawks. The basic idea was, for 1962, rather clever. How do you get all the thrills and danger of big game hunting without having any animals killed? Simple. You make a movie about a group of men catching wild animals for zoos. It’s actually even more dangerous and exciting and it provides perfect family entertainment.

Hatari! is epic in scale with lots of location shooting and some very exciting action sequences. It was filmed in what is now Tanzania, and was naturally shot in widescreen and in Technicolor. If that wasn’t enough to attract audiences then for good measure it had John Wayne as its star. With those ingredients it couldn’t miss, and it didn’t, being a very major hit in 1962. 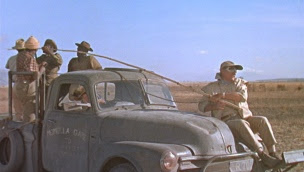 The setup is a rather classic Hawksian one. You have a group of men more or less cut off from the outside world, facing danger and death. That was the classic Hawksian drama formula. Since this one is played mainly as comedy the danger and death elements are downplayed somewhat but the opening sequence, in which one member of the team is badly gored by a rhinoceros, serves to remind us that the dangers are very real. The element of danger is the crucial ingredient for the sorts of camaraderie and group dynamics that always fascinated Hawks.

Sean Mercer (John Wayne) leads the group. They are currently collecting animals, mostly for a zoo in Switzerland. The Swiss zoo has decided it would be a swell idea to send out a photographer to document the expedition. Only they neglected to mention that the photographer they were sending is young, attractive and very female. The arrival of Anna Maria D'Allesandro (soon to become known as Dallas, and played by Elsa Martinelli) is somewhat disconcerting to Sean Mercer. Not that he has anything against women, but he was badly hurt by a woman in the past and now he’s somewhat gun-shy where the opposite sex is concerned. He’s especially gun-shy where members of the opposite sex to whom he is attracted are concerned, and he’s certainly attracted to Dallas. 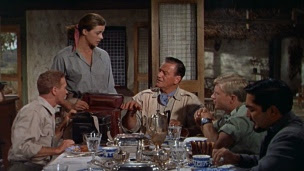 Dallas is not the only woman Sean has to contend with. The animal-collecting outfit is actually owned by Brandy de la Court (Michèle Girardon). Her father had been a famous animal collector until he was killed trying to catch a rhino. His young daughter Brandy was more or less adopted by the survivors but now she’s not so young any more. Now she’s a very attractive young woman of eighteen and that’s going to cause more romantic complications, especially when a young Frenchman joins the team. He notices her charms at once, and that brings her charms to the notice of the team’s ace driver, Kurt Muller (Hardy Krüger). But this is not just a romantic triangle, it becomes a romantic quadrangle when yet a third member of the team decides he’s in love with Brandy.

Sean has his own problems. Like figuring out what to do about Dallas. He knows he’s in love with her but he has no idea how to tell her. Dallas meanwhile has been collecting baby elephants. Lots of baby elephants. They just keep turning up the camp and they all decide that she’s the ideal mother for a baby elephant. Sean also has to worry about the latest project of Pockets (Red Buttons). Pockets fancies himself as an inventor and he’s come up with a brilliant idea for catching monkeys. It’s the fact that his idea involves large amounts of gunpowder that has Sean worried. 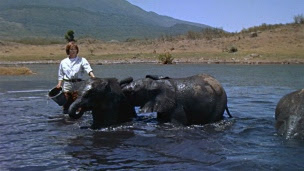 This is, at 157 minutes, a rather long movie. But it doesn’t really seem long at all. The animal-catching action sequences, involving high-speed chases in cars and trucks, are nicely interspersed with the more romantic and comedic scenes. The whole thing is quite well balanced. Some process shots are used in the action scenes but they’re very well done and it’s obvious that most of these scenes are pretty much done for real. They’re a good deal more exciting than most of the CGI-laden dreck that currently infests movie screens. Hawks knew how to do action. With spectacular scenery as a backdrop this movie scores highly on visual impressiveness.

Hawks’ ability to handle action, romance and comedy with equal dexterity stand him in good stead and despite the film’s length he is never in the slightest danger of losing control. 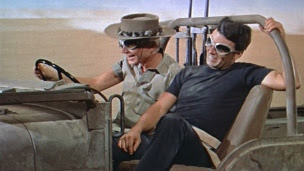 The strong cast certainly helps. John Wayne’s easy-going likeable performance anchors the movie. Red Buttons could be an irritating actor but Hawks knows how to use his comic skills to best advantage and his performance works quite well. Hardy Krüger is equally likeable and is the ideal young gun to Wayne’s experienced old-timer. The only puzzling thing is that with the young and hunky Krüger around the two women seem determined to overlook his obvious charms and instead fall in love with the old-timers! Elsa Martinelli and Michèle Girardon are both delightful.

The barebones Region 4 DVD provides an anamorphic transfer but the picture is inclined to be a little soft and at times the colour balance seems just a little off. 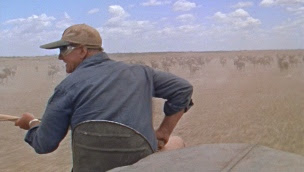 Hatari! is a remarkably good-natured movie that provides action, romance and comedy. It ends with an inspired extended comedic sequence that is almost pure screwball comedy, hardly surprising since nobody ever did screwball comedy better than Howard Hawks. This is family entertainment that actually will entertain the whole family. It’s impossible not to like this movie. Highly recommended.
Posted by dfordoom at 12:51 AM