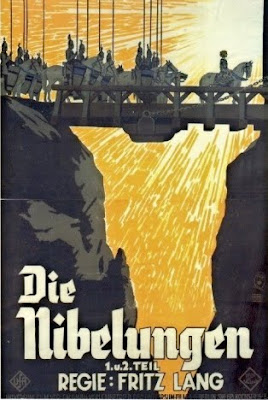 Fritz Lang’s 1924 two-part film of Die Nibelungen was conceived as an attempt to escape from the prevailing Wagnerian interpretation of the German epic. With a screenplay by his wife Thea von Harbou it is often regarded as reflecting the very different perspectives of Lang and von Harbou.

It was originally released in two parts, Siegfried and Kriemhild’s Revenge, but it’s best considered as a single film. This was, like all of Lang’s silent films, a very big-budget and quite spectacular production.

The inexorable working of destiny dominates the movie. The characters appear to have very little in the way of free will.

The hero Siegfried slays the dragon Fafnir and goes on to gain possession of the treasure of the Nibelungs from the dwarf Alberich. He then sets off for the fabulous court of Burgundy to woo Kriemhild, sister of King Gunther. Gunther agrees to the match on condition that Siegfried render him a service. He seeks to marry the Queen of Iceland, Brunhild (in Wagner’s operatic version she was one of the Valkyries), but to gain Brunhild’s hand he must defeat her in three tests of strength and courage. Gunther knows he is not equal to the challenge, but if Siegfried will agree to stand in for him secretly then Siegfried can marry Kriemhild. Siegfried has a magic cap that he won from the Nibelungs that allows the wearer to be invisible or to take on any shape he chooses.

The marriages of Gunther to Brunhild, and Siegfried to Kriemhild, set up fateful tensions. Both women believe that only a hero would be a suitable husband for them, and it is soon obvious that Siegfried is a true hero while Gunther is a counterfeit. Most fatefully of all, on their wedding night Gunther had to ask Siegfried to again stand in for him using his magic cap. As you might imagine, when Brunhild discovers this deception she is enraged beyond endurance. With both women believing that only Siegfried would have made them a worthy husband there is bound to be trouble and the sinister Hagen Tronje will be the instrument for Brunhild’s revenge.

Siegfried’s death at the hands of Hagen will in the fullness of time trigger off a bloodbath. Kriemhild marries King Attila, on the condition that he agrees to avenge Siegfried. Kriemhild’s brothers and various retainers of the Burgundian court are summoned to Attila’s court as guests, and the tragedy moves to its inevitable conclusion.

Every step on the road to this tragedy has been inevitable. Even early on, when the hero Siegfried slays the dragon Fafnir, we see that his destiny is already settled. By bathing in the blood of the dragon Siegfried makes himself invulnerable to wounding. Except for one small patch of skin on his back where a dying flicker of the dragon’s tail caused a leaf from a linden tree to fall onto his back, so that his invulnerability is not quite complete. Lang films the scene in such a way that we have not the slightest doubt that Siegfried’s fate is settled, that he is destined to die from a spear thrust in that one patch of skin.

While Lang’s film is sometimes seen as a modernist interpretation of a medieval epic it’s surprising just how medieval the story remains. The Nibelungs will meet their inevitable fate because their belief in absolute unswerving loyalty to one another means that no power on heaven or earth will induce them to do the one thing that would save them - to surrender Hagen. Even though they are fully aware of his guilt, and fully aware of the justice of Kriemhild’s quest for revenge.

Kriemhild is equally powerless to alter her fate. She has no desire to see innocent men die, but she cannot renounce her quest for vengeance. Siegfried has no male heirs to avenge him, and as a result the duty falls to his widow. The idea of failing to avenge him, the idea that perhaps she has a choice, never even crosses her mind. Siegfried’s death sealed her own destiny absolutely.

Lang saw the film as representing four different worlds. The first is the forest world in which the young Siegfried serves his apprenticeship to the blacksmith Mime, a word of magic The second is the world of ice and fire of Brunhild’s caste. The third is the over-civilised rather decadent world of the Burgundian court. And lastly there is the savage world of Attila’s court. All are depicted in equally artificial styles. Lang at this stage of his career generally preferred the control that shooting in a studio gave him. While the obviously artificial trees in the forest realm seem off-putting at first it becomes clear that Lang was perfectly correct in his approach.

The acting is artificial but this also suits the subject matter. Margarete Schön is extraordinary as Kriemhild and at times the way she is filmed reminds me of a Klimt painting. Hans Adalbert Schlettow as Hagen, like Kriemhild, often seems more like a loving statue than a flesh-and-blood human.

An extraordinary achievement by a master film-maker.

Kino’s DVD presentation is acceptable given the fact that the surviving source materials for most silent films are in less than ideal condition.
Posted by dfordoom at 9:54 PM