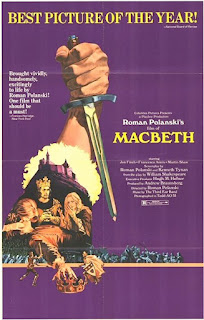 When Roman Polanski made his Macbeth in 1971 Shakespeare’s tragedy had already been adapted to film countless times, going back at least as far as 1908. And among those myriad adaptations were two acknowledged masterpieces by very major film-makers indeed. So was another movie version really necessary or justifiable? The answer, surprisingly, was yes.

Those two acknowledged masterpieces were Orson Welles’ version in 1948 and Akira Kurosawa’s 1957 version (Throne of Blood). The Welles version, which I regard very very highly, is perhaps more wells than Shakespeare. And Kurosawa’s version was in Japanese, with a Japanese setting. A definitive English language version was needed and Polanski set out to provide it.

Polanski’s film is in many ways a more traditional and more conventional version than the Welles film. Polanski has tried to stick fairly closely to what Shakespeare wrote and virtually all of the dialogue is straight from the play. Where Polanski’s movie becomes radical is in its tone. Polanski approaches Macbeth with the sensibility of a horror director and the result can be regarded as both a Shakespearian film and a horror film.

This is Shakespeare with copious quantities of graphic violence and gore, and with nudity. This was the 70s, and Polanski doesn’t hold back. He gets all Grand Guignol with the Bard. On the other hand it has to be admitted that all of the violence is right there in the play even if it had never been depicted on screen with such relish prior to this. Macbeth does after all have some claims to being the first masterpiece of gothic literature.

Polanski’s other innovation is to stress the medieval setting. The real Macbeth was High King of Scotland in the 11th century and Polanski treats the story as a medieval story rather than an Elizabethan one. He gives us medieval grime and squalor, but by emphasising the medieval aspects he also emphasises the remorseless medieval view of vengeance, and a medieval enthusiasm for extreme violence. It works pretty well.

The big surprise is Jon Finch, in the title role. This was his first major film role and he’s superb. Finch had in fact done a good deal of theatre work but his performance is very cinematic rather than stagey. He resists the temptation to go for the kind of theatrical overkill that so many actors succumb to when doing Shakespeare on screen.

Even more crucial to the success of any production of Macbeth is the actress playing Lady Macbeth. Francesca Annis handles it pretty well. She also resists the temptation to go over-the-top. Her Lady Macbeth is not overtly monstrous. Like her husband she is simply seduced by the possibilities opened up by the predictions of the three witches.

Polanski’s direction is stylish without being too obtrusive, although the second meeting of Macbeth with the witches does come across as a bit like a bad acid trip.

There’s a theory that the extreme nature of the violence was Polanski’s way of working through his grief over the murder of his wife Sharon Tate at the hands of the Manson Family. It’s also been suggested that the nudity was included at the behest of executive producer Hugh Hefner, this movie being the Playboy mogul’s attempt to movie into serious movie producing. Personally I suspect that a Polanski version of Macbeth was always going to have a bit more in the way of sex and violence than your average Shakespearian adaptation.

The Columbia Classics 2006 DVD release is reasonable compared to the pan-and-scanned VHS versions that used to be around but this is a movie that deserves a more luxurious DVD (or even Blu-Ray) presentation.

On the whole it’s one of the more satisfying attempts to put Shakespeare on the big screen and if you’re a fan of the Bard it’s really a must-see. And if you’re a horror fan you’ll find it works very successfully as an exercise in gothic horror. Highly recommended.
Posted by dfordoom at 7:03 PM