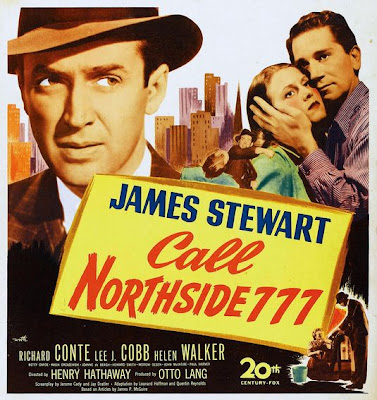 The late 1940s saw the rise of what later became known as the noir docu-drama. It’s a sub-genre I have mixed feelings about but Call Northside 777 shows that it could be done fairly effectively.

The idea was to do movies based on true stories, filmed as much as possible in the actual locations where they occurred and with an attempt to achieve a documentary feel. They may have been influenced to some degree by Italian neo-realism. Jules Dassin’s The Naked City is usually thought of as the first major example of this new trend.

The Naked City is a disappointing and rather dull idea. So why does Call Northside 777 work so much more successfully?

The main reason is that Dassin used a large number of non-actors. Henry Hathaway, the director of Call Northside 777, did not make the same mistake. If you want good acting, you hire a professional actor. Bad acting from non-professionals does not make a movie more realistic although countless film-makers over the years have allowed themselves to be persuaded that it does. Hathaway uses a handful of non-actors but mostly he relies on seasoned professional actors and as a result his film is a good deal more entertaining.

The use of location shooting in Call Northside 777 doesn’t feel like a gimmick. Hathaway and his screenwriters also never lose sight of the fact that their objective is to make an entertaining commercial film, rather than an exercise in film theory. They’re also happy to play fast and loose with the fact of the real case in order to make the movie work better as a movie.

The plot is based, loosely, on a real-life case.

Two Polish-American are convicted in 1932 of the murder of a cop in a speakeasy in Chicago’s Polish district. They are each sentenced to 99 years in prison. Eleven years later an ad appears in the Chicago Times offering a $5000 reward for information leading to the arrest of the real killers. The ad was placed by the mother of Frank Wiecek, one of the convicted men, a woman who has spent years scrubbing floors to earn enough money to offer the reward. The city editor (Lee J. Cobb) knows a good story when he sees one and sends reporter P. J. McNeal to look into the case.

McNeal is a cynical ambitious newspaperman and he is convinced the men are guilty. As the story starts to achieve a momentum of its own in the paper, and as he gets to know Frank Wiecek, he slowly starts to change his mind. So does his editor. Gradually it becomes more than a story for them. They might be hardbitten and cynical but they’re real newspapermen and they can’t let go of this story.

Finding any actual evidence that would serve to clear the two men proves to be quite a challenge. Those who might have helped are either dead or they’ve disappeared. Most notably the key witness, Wanda Skutnik, has vanished into the seedy world of the dregs of the criminal underworld.

James Stewart was starting the process of reinventing himself as an actor, taking on much darker and more complex roles, and this movie marks an important step in that process. McNeal, for most of the movie, is a rather unsympathetic character. He’s cynical about his job and about human nature. He thinks the two imprisoned men are guilty and he’s only interested in their story insofar as it’s a good story. When the story seems to be running out of steam he’s quite happy to walk away from it.

What changes McNeal is Frank Wiecek. Wiecek has a quiet dignity, a willingness to sacrifice himself for his family, an inner strength and an uncompromising integrity. These things are somewhat out of McNeal’s experience, and they don’t fit with his view of Wiecek as a vicious cop killer. In spite of himself he not only comes to believe that there’s been a miscarriage of justice, he also comes to realise that sometimes you can’t walk away.

McNeal achieves a kind of redemption. Not that he was a particularly bad person, but he was kind of empty. He didn’t really believe in anything. And he finds that he needs to believe in something. Stewart was perfect for the role and he’s terrific.

Richard Conte is even more impressive, in a more difficult role. His character could come across as phony or self-righteous or annoying but Conte has a sure touch and he’s perfectly convincing and sympathetic.

It’s perhaps not one of the great noirs but it’s a very solid and entertaining film and well worth a watch.

The DVD includes a commentary track by Alain Silver and James Ursini. I’ve never been overly impressed by the commentary tracks they’ve done but they do have some interesting things to say about the real-life case on which the movie was based.