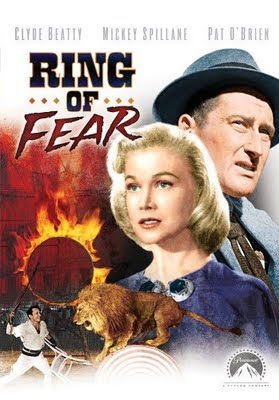 Ring of Fear is a circus murder mystery thriller, and that’s a combination I certainly can’t resist.

It was made by John Wayne’s production company which was responsible for some of the more interesting thrillers of the 50s. Wayne had somehow managed to convince himself that his days as a star were numbered and that he should reinvent himself as a producer. In fact of course he remained a huge box-office draw right up until his final film in 1976 but the move into production proved to be quite fruitful as well.

Ring of Fear has been criticised for having a corny melodramatic contrived plot. Those who see these things as a weakness have missed the point. This is a circus movie. It’s supposed to be outrageous and over-the-top and melodramatic. That’s what circus movies are all about.

The circus is being dogged by bad luck. Animals mysteriously escape. Trapeze artists are injured when equipment breaks even though these artists are thorough professionals who don’t make mistakes like that. Beatty himself is almost killed when a training rope restraining a tiger breaks. It’s starting to become obvious that all this is more than bad luck.

What do you do in a situation like this? So you call in the cops? Of corse not. You call in a a famous crime novelist. In this case Beatty calls in Mickey Spillane, played in the movie by famous crime novelist Mickey Spillane. Spillane soon picks a likely suspect. Dublin O’Malley (Sean McClory) is a colourful larger-than-life character. He used to be the circus’s ring director. He’d disappeared for several years but now he’s back, and he’s the ringmaster again.

What the movie audience knows, and what the other characters in the movie don’t know, is that when Dublin O’Malley disappeared from circulation for a few years he was in fact in a hospital for the criminally insane. That’s not a spoiler - that information is revealed right at the very start of the movie. The movies uses the classic thriller technique of creating suspense by revealing information rather than concealing it.

Dublin was in love with beautiful trapeze artist Valerie who married another man. The husband-and-wife team now works for the Clyde Beatty Circus. But has Dublin come to terms with the fact that Valerie chose someone else?

Dublin has an ally, a clown called Twitchy. Dublin has a major hold over Twitchy. We’re never told the precise details but it’s implied that Twitchy committed a sex murder years earlier. Whatever it was, it’s apparently enough to guarantee Twitchy the death sentence if Dublin were ever to make a phone call to the cops.

Mickey Spillane will have to work fast if he’s to prevent further tragedies.

It’s all very melodramatic but it’s great fun. Clyde Beatty can’t act but he has a certain presence. Mickey Spillane has lots of presence and he’s surprisingly very effective, and very entertaining. The movie has thrills and spills and lots of excitement. This might be, when judged in conventional terms, a bad movie but it’s an immensely enjoyable romp and I thoroughly recommend it. Especially if, like me, you’re a sucker for circus movies.