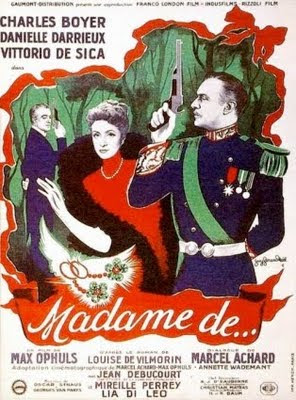 Earlier in his career he’d made movies in Germany and Italy as well. He seemed to be able to adapt to any film industry. His US movies, particularly The Reckless Moment and Caught, had a film noir flavour. When he returned to France he concentrated on costume dramas. But his central preoccupations remained unchanged - women and love, or more specifically women and their relationship to love.

Circularity was always a bit of an obsession for Ophüls, often as a visual device, but in this movie it’s the key to the plot. The unnamed Madame de has a pair of earrings that change hands a bewildering number of times, but always in a kind of circular motion. 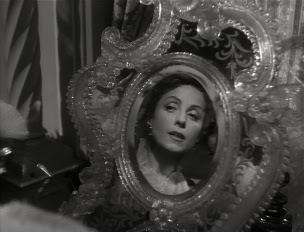 The earrings were a wedding gift to the unnamed protagonist (played by Danielle Darrieux) from her husband. Her marriage has been a success of sorts. The General, her husband (Charles Boyer), is successful and respectable. He has affairs, but they are conducted with exquisite discretion. His wife has clearly had affairs as well, and until now we assume she has been similarly discreet.

Unfortunately she is rather extravagant in her lifestyle, and finds herself financially embarrassed. She will need to sell something, and decides that the earrings her husband gave her would be the least painful sacrifice. It’s not that she dislikes her husband particularly, but they are not teenagers and they are beyond silly romantic attachments to such trifles. 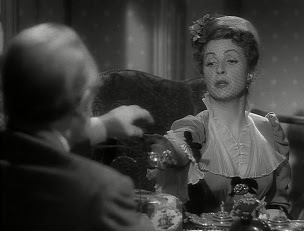 Madame de is however about to commit a major social faux pas. She is going to fall in love with one of her lovers. The Baron Donati (Vittorio de Sica) is a handsome Italian diplomat. Their affair starts the way all her romantic liaisons start. Her husband is not displeased. The baron is a gentleman and a man of the world and his discretion can be relied upon. The important thing is to avoid scandal and to avoid messy emotional entanglements, and both the General and the Baron understand the rules by which such sexual games are played. As Madame de gets drawn further and further into a romance she had never intended, her earrings start to assume a strange importance. In their strange circular journey the have become associated with her love for the Baron Danati. They have perhaps become a symbol in her eyes for love itself. This obsession with both love and with these earrings will create a situation in which the General will feel he must act, with possibly fatal consequences, but for whom?

Madame de has always regarded love as a mere amusement, but now she finds that love is a passion that cannot be controlled. For someone as superficial as her this is a very disturbing discovery. 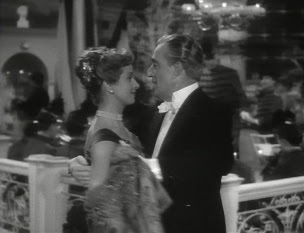 The plot is in some ways as superficial as the characters, but Ophüls’ genius transforms this very slight story into an oddly moving and engaging movie. And perhaps it only seems superficial because of our ingrained prejudices about the kinds of movies that are important. We’re inclined to dismiss movies that are about love as being of little consequence when compared to movies about gangsters, crime and politics. But really aren’t these things much less important than love? At one point the General remarks to his wife that their marriage is only superficially superficial and this observation could certainly be applied to this movie and to Ophüls’ films in general.

Danielle Darrieux gives a flawless performance as Madame de. Charles Boyer as her husband and Vittorio de Sica as her lover are equally good. Boyer in particular is superb. He has what is arguably the most difficult but also the most challenging role. All three characters in this romantic triangle start out believing they’re playing a charming but harmless game and all three will find out that love is far from harmless. 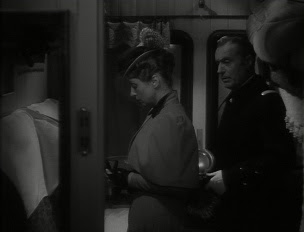 The Region 4 Director’s Suite DVD comes with one of the worst commentary tracks I’ve ever encountered. The fact that the guy responsible for it is both an academic and writes for an online journal called Rouge should of course immediately ring alarm bells that we’re about to be treated to a doctrinaire marxist feminist interpretation of the movie, and sure enough before very long he’s quoting Engels and assuring us that this is an example of pure marxist cinema. Absolute rubbish.

The good news is that the transfer is extremely good and the movie looks terrific. A great movie, highly recommended.
Posted by dfordoom at 10:25 AM