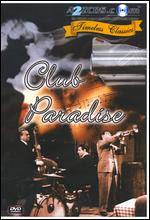 Club Paradise is a 1945 Monogram B-movie, and while their movies are often regarded with disdain I have a bit of soft spot for 1940s B-movies made by Poverty Row studios. This one is definitely worth a look.

The Rogers family is one of those poor-but-honest families that seemed to many to be a natural embodiment of virtue but underneath the façade they present to the world all is not well. The father of the family is bitter, and the husband of daughter Katie hasn’t worked for a long long time. He’s turned to drink and self-pity. The other daughter, Julie (Doris Merrick), is looking for a way out. 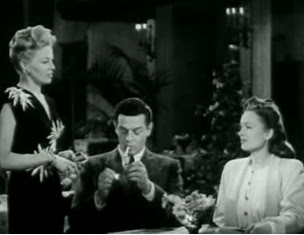 She at first thinks she’s found that escape in likeable trumpet player Ray (Eddie Quillan). Ray wants to put together a real band and play in up-market nightclubs but he needs money to get him started. His scheme to make the money by gambling goes badly awry when the illegal gambling joint he’s chosen gets raided by the police. Both Ray and Julie get sentenced to a fine of $30 or 30 days in jail. Her father pays Julie’s fine but then kicks her out.

Julie now turns to a man she met in the notorious Club Paradise for help. Danny is a smooth-talking no-good loser who is always trying to make a big score in some crooked deal or other and is always having to be bailed out by one of the women he’s picked up along the way. Only Danny has skipped town, and Julie would have ended up sleeping on the streets if she hadn’t been taken in by Danny’s ex-girlfriend. Danny’s ex runs the Paradise Club, and pretty soon Julie is working there as a dancer. 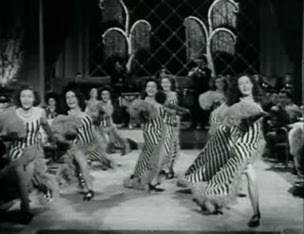 Julie is hopelessly in love with Danny, and she’s about to find out what that entails in practice. Danny owes a lot of money to some very nasty people. They want their money now, and Danny doesn’t have it. He’s getting seriously menaced by a very heavy customer, but he finds a solution. He can’t offer this guy the money he owes him, but he can offer him Julie. Not as an outright sale but just on a loan basis.

This changes Julie’s outlook rather drastically. She still loves Danny, but now she realises that the Paradise Club is her ultimate destiny. She’s damaged goods and can never aspire to any kind of respectable life. When Ray finally gets his big break at the swank Continental Club he offers Julie a job as vocalist with his band, but Julie turns it down. The Continental Club is a classy joint, and she belongs in low dives like the Paradise Club. 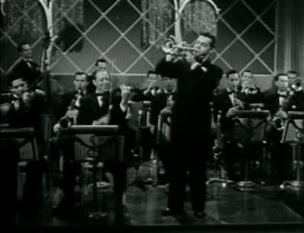 Of course Danny hasn’t yet finished making a mess of Julie’s life and he’s started wrecking her friend Helen’s life as well. This story is clearly not going to end well, and it doesn’t.

The Poverty Row studios like Monogram labored under many disadvantages, but they had their advantages as well. Although they were members of the Motion Picture Producers and Distributors of America (MPPDA) and thereby bound by the Production Code the truth is that the Production Code Authority regarded the movies of Poverty Row studios as being of little importance and they could sometimes get away with a level of sleaze that would not have been tolerated from a major studio. They also had the advantage of not having to care very much about their public image! 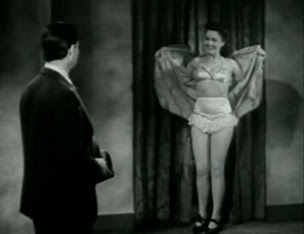 The script is rough around the edges, the direction is basic and the acting is terrible. But this movie has a cheap tacky sleazy glamour that is very film noir. You can smell the stale beer and the despair and desperation. The obvious comparison is to Edgar G. Ulmer’s bleak noir masterpiece Detour, made in the same year, and like Detour this is a story of people that you just know are not going to make anything of their lives. It’s a public domain movie and while the picture quality of most available versions is pretty dubious it can be picked up for almost nothing, or downloaded legally for absolutely nothing. It’s a movie that is not terribly well known to film noir fans but is certainly worth watching as long as you’re prepared to make allowances for its Poverty Row cheapness.