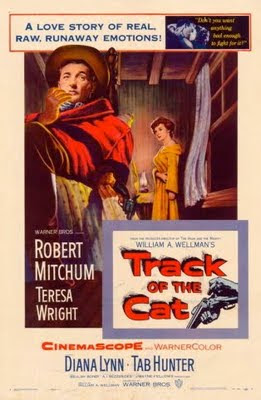 William A. Wellman’s 1954 western Track of the Cat suffered a similar fate to Charles Laughton’s 1955 Night of the Hunter. Both were exercises in style for which the movie-going public of the 1950s was not ready, both failed commercially at the time, and both went on to be highly regarded examples of art cinema at its best.

Track of the Cat hasn’t undergone the same degree of rehabilitation as Night of the Hunter but in its own way it’s just as impressive.

The plot is very much a secondary consideration. A painter (puma) has been attacking stock on a remote ranch owned by the Bridges family. The two oldest Bridges brothers, Curt (Robert Mitchum) and Arthur (William Hopper) set off to track down the predator.

The old Indian who lives at the ranch, Joe Sam, believes the attacks are the work of a mysterious black painter, a kind of supernatural beast. To Joe Sam the painter symbolises the violence in the world, the violence that destroyed his own family. It will come to be seen as having much the same significance for the Bridges family.
In fact the movie has nothing whatever to do with hunting marauding pumas. It’s a family melodrama, with the painter being a personification of the passions, jealousies, resentments and hatreds that collectively make up the Bridges family.

Pa Bridges is a hopeless drunk with only the haziest idea of what’s happening. The family has been dominated by two overwhelming personalities, Ma Bridges (Beulah Bondi) and Curt. Ma Bridges is a pious fraud, a controlling monster of a matriarch. Curt easily dominates brother Arthur, and younger brother Harold (Tab Hunter) is practically a nonentity, existing merely to serve as the butt of Curt’s jokes. Harold has fallen in love with Gwen Williams (Diana Lynn) but nobody believes he’ll ever have the courage to ask her to marry him. Harold has never had the courage to do anything. Sister Grace (Teresa Wright) retreats to her room and to her music.

But now the painter has come and Curt is off in the mountains hunting him and the family tensions are coming to the boil.

Director Wellman conceived this movie as a experiment in colour. He’d long had the idea of making a black-and-white movie in colour. His idea was that if a movie were to be shot in mostly monochromatic shades, with stark blacks and whites and otherwise mostly very subdued colours that were almost shades of grey, he could use bright colours very very sparingly for intense dramatic effect. In fact the only bright colours are Curt’s red jacket and Gwen’s yellow blouse. Curt has always been the central figure in the family, the de facto boss and patriarch, while Gwen is the disturbing new element . They’re the two characters with the power to make things happen. Everyone else reacts to what they do.

In practice this visual idea results in a movie with a distinctive and rather disturbing look. And Wellman doesn’t stop with the colour. He uses spectacular location shooting for the scenes in which Curt hunts the cat, but as soon as we move back to the ranch we’re obviously on a sound stage. The exteriors of the ranch are filmed in such a way as to emphasise their artificiality, to make sure we’re in no doubt this is a sound stage. Wellman wants us to see the ranch as something artificial and unnatural, something that doesn’t belong, something that should be alive but isn’t. It’s a kind of surreal doll’s house, and again the resemblances to Laughton’s vision in Night of the Hunter are striking.

Wellman (with the able assistance of his cinematographer William A. Clothier) took huge risks with this film and while they didn’t pay off commercially at the time they certainly paid off artistically. And the movie’s reputation has slowly grown.

Wellman had the advantage of having a fine cast to work with and the performances are uniformly good. The role of Curt required the kind of vaguely sinister charisma that Mitchum could always produce when needed and his presence dominates the film even when he’s not onscreen, just as the personality of Curt dominates this bizarre family even when he’s not there.

It’s a movie that is something of an oddity but it’s well worth seeking out as an example of just how edgy 1950s Hollywood film-making could be. It was produced by John Wayne’s production company which was responsibly for so many interesting and offbeat 1950s movies.