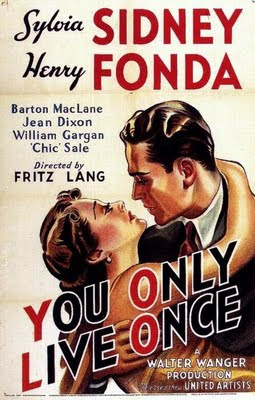 You Only Live Once, released in 1937, was Fritz Lang’s second Hollywood film, and it’s also one of his most interesting. And it’s very much a precursor of the American film noir cycle of the 40s and 50s to which Lang would contribute so memorably.

Along with Fury, his first American production, it’s often considered to be one of his more political movies, which may be something of a misunderstanding of the movie. Fury dealt with lynching, while You Only Live Once deals with an ex-convict trying to go straight and (supposedly) being prevented from doing so by a hostile and oppressive society.

What’s often overlooked with Lang is that he was raised a Catholic and always considered himself to be one, and apparently he considered this to be his most overtly Catholic film.

Henry Fonda is Eddie Taylor, newly released from prison. This was his second stretch in prison and now he knows that if he goes back again under the state law at that time he’ll get life. He says that this time he’s definitely going to go straight but adds ominously, “If they’ll let me.”

Joan Graham (Sylvia Sidney) is a very respectable young woman who works for the Public Defender, and she’s in love with Eddie. They’re going to get married as soon as he gets out, much to the horror of both her sister and her boss, both of whom consider Eddie to be a born loser. On their honeymoon they’re kicked out of their hotel room at 4 am when the landlord realises Eddie is an ex-con. To Eddie this merely confirms his belief that society is out to get him. Shortly before this happens Eddie and Joan are watching frogs in the pond near the hotel and Eddie remarks that if one frog dies its mate will die as well. “Just like Romeo and Juliet,” as Joan comments, another fateful statement.

Despite this things go well for the young couple initially. The kindly and idealistic prison chaplain, Father Dolan, organised a job for Eddie as a truck driver. They’re about to take out a home loan, but Eddie is so busy with house-hunting he turns up an hour and a half late for work, and gets fired. To Eddie this is more evidence that everything is against him. And they’re already committed to the new house. Eddie tries to talk his boss into keeping him on but when he refuses Eddie loses his temper and slugs him. Eddie bitterly remarks that the only people who’ll give him a job now are his old pals, and the only work they have on offer involves robbing banks.

We now cut to a bank robbery in progress, a robbery that leaves six people dead. And Eddie’s hat is found at the scene. It seems that he wasn’t able to keep out of trouble after all. Eddie arrives home late that night with a wild story that he’s been framed for the robbery. Joan persuades him that if he’s innocent he should give himself up because he has nothing to fear. Eddie takes her advice, and ends on on Death Row. But the story is not over yet.

This seems to be a movie about the ways different people perceive the world differently, and often misperceive it. The hotel owner, the Public Defender and Joan’s sister see Eddie as an habitual criminal who will never make good. Joan sees him as a good man. Eddie sees the world as a kind of conspiracy against him, Joan sees the world as fundamentally just and fair. Father Dolan sees hope, Eddie sees a system stacked against him and a world of every man for himself.

It’s also very much about faith. That’s the element modern audiences may have trouble with. They may find it difficult to take a character like Father Dolan seriously, or see him as Eddie sees him - as an agent of an oppressive system or even as a figure of fun. But to ignore the theme of faith in this movie is to miss much of its complexity, and much of the ambiguity that makes it so interesting. There’s certainly a political dimension but if that was all the movie was about it would have been as dull as most politically motivated movies of its era. Lang’s movie has a lot more going on.

One of the ironies of the film is that the character who seems most deluded and most naïve, Joan, turns out to be right every time. She is right about Eddie, and in a tragically ironic way she is right about the system. She has absolute faith in the goodness of both people and society, and if only Eddie could have picked up some of that faith he could have avoided disaster. In one fatal moment his only hope is to put aside his accustomed suspicions and anger and make a leap of trust. But he cannot.

Fate is always mentioned in relation to Lang’s films, but in this particular movie the protagonists have the freedom to make choices to avoid their fates. But perhaps being the people they are they were always going to make the choices they made.

I’ve always disliked Henry Fonda but he’s oddly effective here. Given the plot outline you expect Eddie to be sympathetic character but he isn’t. Fonda makes him a rather unpleasant young man with a chip on his shoulder and way too much self-pity but that’s another way in which this movie is more interesting than the story outline would suggest.

Despite being still very much a newcomer to Hollywood production methods Lang is very much in control. He knows what he’s trying to do with this movie and he succeeds brilliantly. Visually it has some nice touches. Darkness and fog would become staples of film noir but rather than use them merely for atmosphere Lang employs them symbolically in several key scenes.

A great movie. The Image Entertainment DVD is adequate although lacking in extras, a pity given that this is such a complex movie.
Posted by dfordoom at 12:24 AM