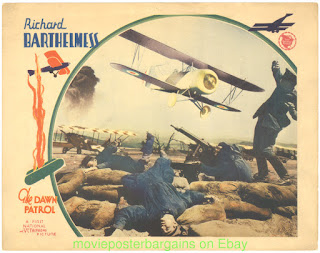 The original 1930 version of The Dawn Patrol is one of those movies that has been almost completely overshadowed by its remake. The 1938 version (with the same title) starring Errol Flynn will be familiar to most classic movie fans while the 1930 version has been lost in obscurity. This is a great pity since the original is not only a Howard Hawks film, it’s also a fascinating glimpse of Hawks the film-maker at a stage in his career when he had not quite perfected his mature style but he was getting pretty close to it. The themes that would obsess Hawks are already apparent, and we can see in embryo the ways in which he would tackle those themes again and again.

It is late 1915 the 59th Squadron of the Royal Flying Corps has been taking a pounding. Their commander, Major Brand (Neil Hamilton), finds himself having to send inexperienced  young pilots straight into the thick of the fighting and inevitably many do not survive even their first mission. The stress is made worse for Major Brand since he himself, as the commanding officer, cannot fly combat missions. As a result he feels like an executioner sending men to their deaths.

Major Brand clashes repeatedly with his subordinate Captain Courtney (Richard Barthelmess). Supposedly there has been bad blood between them since an incident involving a woman in Paris, but as the kindly old squadron adjutant points out to one of the pilots the reality is that they are very close friends. They simply find it easier to deal with a difficult situation by blowing off steam at each other. This is a theme that will be echoed later in the movie, one of the many example’s of the movie’s interesting cyclical structure.

The squadron’s two veteran pilots are Captain Courtney and Lieutenant Scott (Douglas Fairbanks Jr). Their job is to keep the green pilots alive while also carrying out their missions. 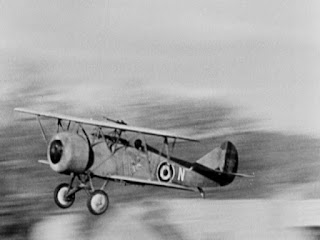 The war progresses and Major Brand is promoted to a headquarters job. Captain Courtney, who has always been derisive of desk-bound officers who send men into combat, now finds himself playing exactly that role.

The cyclical structure is the key to the movie. Crucial scenes are played out in exactly the same way on three separate occasions, each time with different characters, and each time with even greater emotional impact. A simplistic interpretation would be that this is a commentary on the futility of war but that would be quite uncharacteristic of Hawks, and in any case the film itself makes it fairly clear that this is not the intention. In fact the intention is to emphasise that danger and death are always the enemies and they are always with us. The movie is very sympathetic to the Germans who are portrayed as honourable and heroic foes and this is another indication that the enemy is not the soldier on the opposing side, the enemy is death itself. In one scene a captured German flyer is brought in. He is immediately asked if he would like a drink and he is soon carousing merrily with the British flyers. He is not an enemy; he is a comrade since he faces the same dangers the British pilots face and he faces those dangers with the same courage and cheerfulness. 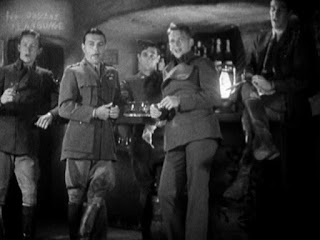 Hawks was always fascinated by the behaviour of men confronted with the imminent danger of violent death. He was fascinated not just by the way men dealt with this situation, but the ways in which groups of men dealt with it. This early Hawks movie offers us the kind of setup he would use again and again. As in his later masterpiece Only Angel Have Wings the men of the 59th Squadron in The Dawn Patrol seem strangely isolated. We never see the superior officers who issue the orders to the squadron’s commander. We get only brief glimpses of events elsewhere. Virtually the entire movie takes place in the squadron’s commander’s office, the squadron’s recreation room, and in the air. By effectively cutting this group of men off from the outside world Hawks is able to focus on the men themselves and the way to relate to each other.

The men of the 59th Squadron have learnt, in classic Hawksian style, that the only way to face death is to laugh in his face. It might be sheer bravado but it works. 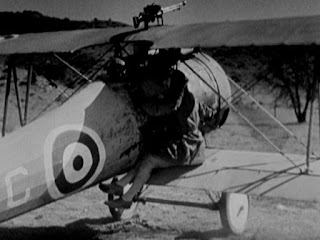 This movie suffers from many of the typical weaknesses of very early talkies. It’s slightly clunky in places and the supporting players in particular overact in silent movie style. This was also one of Hawks’ first talkies and his comparative inexperience shows at times. This gives the movie a rather ragged and raw feel that actually works in its favour. Hawks would later learn to tackle similar themes in a more polished manner but what matters is that the emotional impact is there.

The flying scenes were good enough to be re-used in the 1938 remake. The Hawks signature is apparent here as well. What matters to Hawks is not the action but the way men react to it and on several occasions Hawks simply shows the aircraft of “A” Flight taking off then cuts immediately to the squadron commander waiting anxiously at his desk for the sound of the returning aircraft. We don’t need to see the fighting; it is the emotional cost that matters. When the aerial fighting scenes are shown they are spectacular enough however and they stand up very well indeed today. 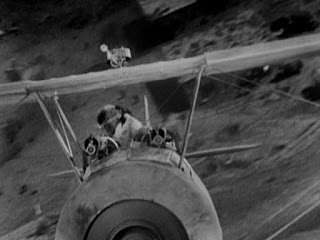 Richard Barthelmess gives a brooding low-key performance that captures the spirit of the dogged and indomitable Hawksian hero perfectly. Douglas Fairbanks Jr is somewhat histrionic but he gets way with it. We accept that a man in his position might well find that being slightly histrionic is the best way to deal with his situation.

The print used on the Warner Archive made-on-demand DVD release is far from perfect but its flaws are nowhere near serious enough to detract from the enjoyment of the movie.

Without taking anything away from the 1938 remake this 1930 Hawks’ version ofThe Dawn Patrol has more emotional punch and is overall the better movie. Highly recommended.
Posted by dfordoom at 6:40 PM