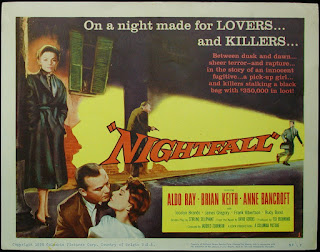 Nightfall was released by Columbia in 1957, a time when many authoritative books on film noir tell us that film noir was virtually dead. It has to be admitted that many of the late 50s movies included in film noir boxed sets are at best marginally noir. It therefore comes as a pleasant surprise that Nightfall is both genuine noir and also an extremely good movie.

This movie was directed by Jacques Tourneur, written by Stirling Silliphant and based on a novel by David Goodis so maybe we shouldn’t really be surprised by its quality. Tourneur after all did direct possibly the greatest noir of them all, Out of the Past. Goodis was one of the best of the American hardboiled writing school, while Silliphant would go on to write The Lineup in 1958, another somewhat neglected but superb noir. 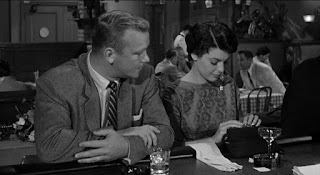 Nightfall starts off in classic noir territory. It’s night time in LA and insurance investigator Ben Fraser (James Gregory) is shadowing a man named Vanning (Aldo Ray). Fraser’s job is to recover $350,000 stolen from a bank in Wyoming. He knows Vanning was involved in some way but he can’t help having a nagging doubt about Vanning’s actual guilt. He’s been shadowing Vanning so closely that he feels like he really knows the man, and it is after all his job to recognise the signs of guilt in those suspected of crime. Somehow Vanning doesn’t quite fit. He’s obviously on the run and obviously scared but he doesn’t seem scared the way a guilty man would be scared.

Vanning has much the same effect on model Marie Gardner (Anne Bancroft) when he picks her up in a bar. Being a model Marie has heard just about every phony line in the book from men but Vanning really does seem to be a pretty decent guy. When he tells her his story, even though the story might seem far-fetched to most people, she’s inclined to believe him. Pretty soon she finds she has little choice - she will have to trust him if she wants to stay alive. 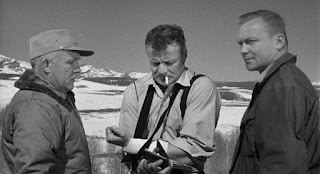 Vanning’s story is told in a series of flashbacks. He was on a hunting trip in Wyoming with a doctor friend when they had a very unlucky encounter with a couple of very nasty bank robbers. It was the kind of encounter that could plunge a very ordinary law-abiding citizen straight into the worst kind of noir nightmare world, a world of casual violence and murder.

The nightmare is far from over. By a series of mischances the two bank robbers no longer have the money they stole from the bank, and they’re pretty sure Vanning either has the money or knows where it is. In a memorable and very noir night scene by a deserted oil derrick they try to convince Vanning to tell them where the money is. Their methods are convincing to say the least but things don’t turn out quite the way they planned.

From the very noir world of LA at night the scene switches to the magnificent natural beauties of Wyoming, but Tourneur has no trouble maintaining the atmosphere of fear and menace. 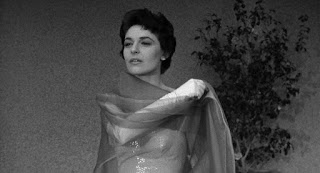 Aldo Ray is perfect as Vanning. He is a man with something to hide, something dangerous, something that haunts him, but at the same time Ray makes us feel that Vanning really is a very nice guy who doesn’t deserve his fate.

James Gregory was a reliable character actor and handles his role with ease. Ben Fraser is a man who doesn’t give up but he isn’t interested merely in getting a result. It has to be the right result. He’s a sympathetic character but a strong one as well.

The two bank robbers are Red (Rudy Bond) and John (Brian Keith) and they’re as dangerous a pair as you’re ever likely to come cross. Red is crazy, and it’s a bad craziness. Red likes hurting people and he likes killing people even more. John isn’t crazy and he doesn’t enjoy violence but he accepts violence as part of the package when you’re on the wrong side of the law. He won’t enjoy it but John will kill you with sublime indifference if he feels he has to. Either of these men on their own would be dangerous enough but together they’re a time-bomb waiting to go off. They would kill each other without a second’s hesitation and they will certainly kill anyone who gets in their way. 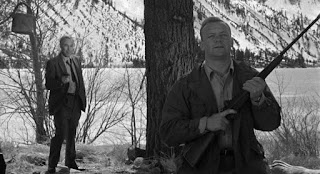 Red is your basic movie psycho, but Rudy Bond makes him memorable. Brian Keith gives one of his best-ever performances as John. There’s a touch of black humour in his performance but at the same time we’re never allowed to forget that he’s a cold-blooded killer, which makes the black humour quite disturbing. Which is of course the intention of both the actor and the director.

If there’s a weakness in the film it’s perhaps that Anne Bancroft’s character doesn’t have the necessary depth to make her a truly interesting film noir female lead. Bancroft does nothing wrong but she isn’t given quite enough to work with. 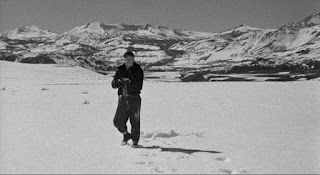 You expect some good visual set-pieces from Tourneur, and you get them. The oil derrick scene mentioned earlier and the later snow-plough scene are executed with the director’s usual skill. Burnett Guffey’s black-and-white cinematography is of the quality you’d expect from a cinematographer of his high reputation. The sudden switch from LA to Wyoming works well, nicely emphasising the lead character’s position, caught between the worlds of light and darkness.

This movie is part of the Columbia Film Noir Classics II boxed set. The lack of extras for this particular movie is disappointing but the 16x9 enhanced transfer is excellent.

Compared to his best work, to movies like Cat People, I Walked with a Zombie and Out of the Past, Nightfall is perhaps lesser Tourneur but it’s still a superbly crafted and very entertaining film noir. Recommended.
Posted by dfordoom at 2:05 AM