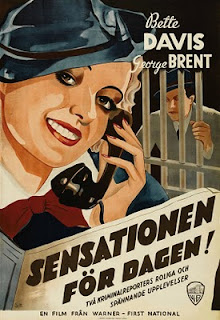 Devlin (Brent) wants to marry Garfield (David) and naturally wants her to quit her job, since being a newspaper reporter is no job for a woman. They make a bet - if he can prove that women are no good as journalists, she’ll marry him. Which of course makes sense - why wouldn’t a woman want to marry a man who has publicly humiliated her and demeaned her and spends most of his time making snide remarks about how stupid women are?

This is 1935, the Production Code is in force, and it’s time for uppity women to be put in their place. And if you need an actor to portray an arrogant sexist pig, who better than George Brent? He made an entire career out of playing obnoxious pigs. Of course Garfield doesn’t really mind being treated like an idiot, because she doesn’t really want to be a reporter. She wants to get married. 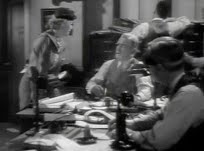 If you can sit through 80 minutes of George Brent being insufferable and annoying, you do get to see Davis finally get the upper hand. Sort of. But of course, after he’s systematically sabotaged her career and engaged in every kind of underhanded trick to make her look like a fool, she realises how much she really loves him and how much she wants to marry him.

You also have to endure the unbelievably irritating Roscoe Karns as Devlin’s offsider. 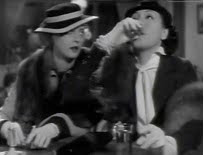 Apart from His Girl Friday I’m not really a fan of newspaper movies, and Front Page Woman did nothing to make me alter my views on the genre. At this stage it’s clear that Warner Brothers still didn’t have any clear idea what to do with Bette Davis, and she’s wasted in this role.

This not a movie I’d particularly recommend. It’s a good example of the less obvious sort of damage done by the Production Code. And it's disappointing because Bette Davis as a feisty woman reporter could have been a real winner in the pre-code days.
Posted by dfordoom at 1:16 AM