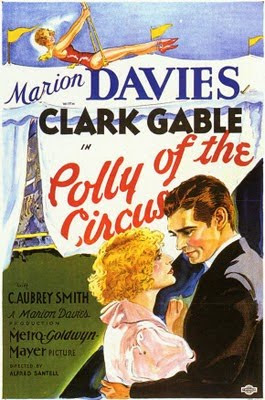 Polly of the Circus tells the tale of a circus trapeze artist who falls in love with a preacher.

Arriving in a small unnamed town young Polly is outraged to see that her posters have been defaced by moral crusaders. Her skimpy costume has been augmented on billboards by the addition of skirts and even bloomers. She assumes (wrongly) that the local Episcopalian minister, the Rev John Hartley, is responsible. In fact the young preacher is a keen circus fan and he’s in the audience at their first performance.

When a heckler makes some remark about her costume and the posters Polly loses concentration and plunges 50 feet to the ground. The minister insists that the hospital is too far away and the girl too badly injured to survive the trip so he suggests she be taken to his home. When the doctor examines her he has good news - there is no permanent damage but Polly will need at least three weeks to recover. In fact her recovery takes much longer, which may have something to do with the fact that the Rev Hartley is a young, handsome, hunky and unmarried clergyman.

It’s not long before they’re both madly in love. But John Hartley is devoted to the Church and has ambitions (his uncle is a bishop). Will his congregation accept a circus girl as a minister’s wife? Will any congregation accept such a scandalous marriage? Will true love eventually triumph, or will it all end in tragedy?

With the trapeze artist being played by Marion Davies and the preacher being played by Clark Gable we have here the makings of a delightful breezy romantic comedy. Alas, it is not to be. Polly of the Circus takes a different direction and we

All is not lost however. Despite being a very surprising casting choice as an earnest and rather pious man of the cloth Gable gives a pretty reasonable performance. Being Gable he can’t help making John Hartley a rather likeable character with a bit of a twinkle in his eye, and that works to the movie’s advantage. We need to be sympathetic towards the preacher. 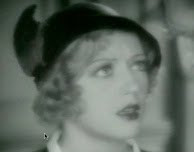 Marion Davies is adorable. She’s lively, free-spirited and very sexy and we have no difficulty in believing that the young churchman would fall madly in love with her, or that he would be prepared to sacrifice everything for her. Gable and Davies have plenty of chemistry and they manage to make the movie quite watchable despite its faults.

While the script is certainly a weakness the bigger problem is that the story was already an old one (it had in fact already been filmed as early as 1917) and by 1932 was starting to look a bit dated. While it’s reasonable to assume that in 1932 a circus

performer might have been considered a less than ideal matrimonial choice for an up-and-coming minister one can’t help wondering if it would have been quite such a big deal as the movie suggests. Polly is a bit of a rough diamond but she’s not exactly a brazen hussy.

There’s not much that’s distinctively pre-code in this production. There’s no suggestion that Polly’s life has been a procession of sin and debauchery, in fact she’s pretty virtuous.

Polly of the Circus is worth a look if you’re a fan of Clark Gable and/or Marion Davies. Don’t expect too much of it though.
Posted by dfordoom at 12:25 PM