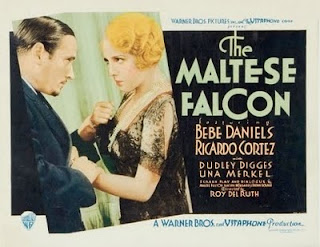 Dashiell Hammett’s novel The Maltese Falcon had already been filmed twice by Warner Brothers before John Huston’s clasic 1941 version appeared. That might lead you to expect that the earlier versions were very poor adaptations. In the case of the original 1931 version, that expectation turns out to be dead wrong.

While it’s not as good as Huston’s film the 1931 version is still a splendid little effort in its own right. And it’s very much a pre-code movie as well. Director Roy del Ruth was no auteur but he was extremely competent and this is the kind of material he handled particularly well.

The plot flows Hammett’s novel reasonably closely. A beautiful woman (Ruth Wonderly, played by Bebe Daniels) turns in up in private eye Sam Spade’s office with a concocted story about a kidnapped sister. She wants the suspected kidnapper tailed, and in the course of doing this Spade’s partner Miles Archer is shot to death. This doesn’t exactly break Spade’s heart, especially given that he was having an affair with Archer’s wife, but he is annoyed when it becomes evident that Ruth’s story was a pack of lies.

What is really going on, of course, is that an assortment of adventurers and thieves is trying to get hold of a statuette of a falcon, a statuette give as a gift to the Holy Roman Emperor Charles V by the Knights of St John in the 16th century. The falcon is rumoured to be made f pure gold an encrusted with fabulously valuable jewels although its appearance has since been disguised by a coating of black enamel. Spade gets interested himself when he finds out just how much money the bird is worth, but he has to deal with some very shady dealing by just about everyone involved and there’s also the matter of two murders (Spade’s partner Miles Archer and the guy he was tailing both being now dead), and to make things more annoying the police are keen to put Spade himself in the frame for both killings.

makes a very good Sam Spade. He’s hardbitten and cynical and sleazy, and he’s also an indefatigable womaniser. Bebe Daniels is sexy and manipulative as Ruth (the character better now as Brigid O’Shaughnessy in the 1941 version). Dudley Digges as Gutman and Oto Matieson as Joel Cairo inevitably don’t measure up to the performances given by Sydney Greenstreet and Peter Lorre in the ‘41 version (no-one possibly could measure up), but if you can put the Greenstreet and Lorre characterisations out of your mind then Digges and Matieson are actually pretty good. Une Merkel is marvellous as always, as Spade’s secretary Effie. And look out for Dwight Frye in the role of the punk played by Elisha Cook Jr in the later film - Frye is very creepy indeed as usual.

The big advantage this movie has over Huston’s is that it’s a pre-code movie. There’s a lot more sex. This is a delightfully naughty and cheerfully immoral pre-code production. T

here’s plenty of implied nudity, and it’s obvious that Sam Spade is bedding Ruth Wonderly at the same time as he’s still sleeping with Miles Archer’s widow, and he’s pretty friendly with Effie as well. Thelma Todd as Iva Archer gets to deliver a classic pre-code line about “the dame wearing my kimono” when she discovers that Sam has just spent the night with Ruth. The homosexual connotations of the relationship between Caspar Gutman and his faithful gunman Wilmer (which are fairly explicit in the novel) are also made rather obvious.

This movie manages to combine both pre-code wickedness and hardboiled crime drama with some sly humour and a fair amount of both cynicism and irony (especially in regard to the question of the reality of the falcon legend).

While it might not be able to match Huston’s masterpiece it’s still a very very good movie that stands very successfully on its own merits. Highly recommended, and an absolute must for fans of pre-code cinema.
Posted by dfordoom at 9:38 PM