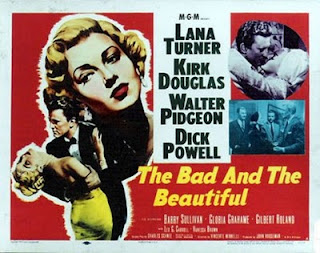 The Bad and the Beautiful is one of two great movies about the movie industry itself to be directed by Vincente Minnelli (the other being Two Weeks in Another Town which interestingly enough also starred Kirk Douglas).


When you mention Minnelli you think of musicals but he had a real flair for full-blown melodrama with a surprisingly dark touch.


The film opens with big-time movie producer Jonathan Shields (Kirk Douglas) on the skids.  As his business manager says at the moment he can’t raise 25 cents on the name Jonathan Shields. But Shields wants to make a comeback and he’s trying to enlist the help  of three people who played a major part in his career when he was one of the biggest players in Hollywood.

Georgia Lorrison (Lana Turner) is the hottest actress in Hollywood, James Lee Bartlow is a Pulitzer Prize-winning novelist and Fred Amiel (Barry Sullivan) is a top director. All have won Oscars and gone on to glittering careers after working with Jonathan, but all three have vowed never to work with him again. In a series of flashbacks we find out why.


Jonathan is a monster, an egotistical megalomamiac, a manipulative liar and a man who’d sell his soul to raise money to make a picture. He’s also a great man, the kind of larger-than-life character who made Hollywood great. And while Georgia James Lee and Fred all have reasons to hate him the fact is that they would have been nothing in Hollywood without him.


Fred had ambitions but lacked the push to get deals done. Jonathan supplied that push. James Lee would have stayed in his sleepy southern college town forever without Shields. And without Jonathan Georgia would still be a self-pitying drunk drifting from one man’s bed to another.

The stories of these three people are told in three extended flashback sequences. Minnelli directs proceedings with plenty of style and energy. While this picture is in the tradition of Hollywood movies about Hollywood itself this is no Sunset Boulevard Sunset Boulevard. Minnelli and screenwriter Charles Schnee lack Billy Wilder’s all-consuming misanthropy and while they don’t avoid Tinseltown’s dark side they can see the other side as well. Not that I dislike Sunset Boulevard, but this is a different kind of film.


It’s a rather grown-up movie for 1952. Jonathan’s sexual tastes (he likes cheap starlets) and Georgia’s open-bed policy as far as sex is concerned are discussed openly and non-judgmentally. There’s a great deal of extra-marital sex going on in this movie and it’s treated in a remarkably casual manner.

Kirk Douglas is crucial to the film’s success. We must admire Jonathan even as we’re appalled by him, and we must continue to care what happens to him. Douglas achieves both objectives. Lana Turner is unexpectedly good as Georgia while Gloria Grahame contributes a memorable turn as James Lee’s cheerfully randy (and terrifyingly greedy and manipulative) wife. There are no weak acting performances at all in this film. Also look out for Leo G. Carroll as a pompous English film director.


This is the kind of big-budget over-the-top melodrama that became extremely unfashionable after the rise of auteurist criticism and the New American Cinema in the late 60s. I must confess there was a time when I would have sneered at a movie like this. The arrogance of youth!


Thankfully I’m over that now and can enjoy movies like The Bad and the Beautiful without guilt. If you too have a taste for melodrama and excess then I recommend this one very highly.
Posted by dfordoom at 12:20 PM