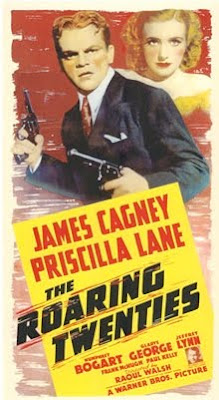 The Roaring Twenties can be seen as a part of the Warner Brothers gangster cycle of the 1930s but it some ways it stands apart from that cycle, as a kind of summing-up of it.

Released in 1939, it has a faintly nostalgic tinge to it and there’s a hint of melancholy. The 20s were already a vanished age and while it had been in some ways an appalling decade it was equally an extraordinary and exciting one. You get a sense watching this movie that some of the vitality had disappeared from life with the end of the Jazz Age and the passing into history of Prohibition, speakeasies, flappers and easy money.

The impressive opening sequence takes us into a shell hole on the Western Front in the First World War where chance has thrown three American soldiers together in what is going to be a fateful meeting. With admirable conciseness the characters of the three men are revealed. Eddie Bartlett (James Cagney) is feisty but likeable. Lloyd Hart (Jeffrey Lynn) is virtuous but dull with just a dash of hypocrisy. George Hally (Humphrey Bogart) is self-centred and cruel. In modern therapy-speak we’d call him a psychopath. The end of the war sees Eddie Bartlett trying to get his old job back, without success. In fact any kind of work is hard to come by for returning veterans. Finally his old pal Danny (Frank McHugh) suggests that since he can only drive his cab twelve hours a day Eddie could drive it for the other twelve hours. Soon chance again takes a hand in the story. Eddie is given a parcel to deliver. He is unaware that the parcel contains bootleg liquor. He is arrested and jailed, but then bailed by the woman he was delivering the package for. She is Panama Smith (Gladys George), she runs a speakeasy, and she provides his introduction to the world of bootlegging.

Success comes quickly to Eddie, at least as far as his criminal career is concerned. He’s not quite so lucky in love. Panama is in love with him but he doesn’t even realise it. He has fallen hard for Jean Sherman (Priscilla Lane), an aspiring singer. She had actually written to him during the war, it being a common practice for soldiers at the front to receive letters from women they’d never met. He’d met her at the end of the war only to realise she was still a schoolgirl. He’d beaten a hasty retreat but no their paths have crossed again. He’s in a position to guarantee her career as a singer and she’s happy to allow him to do so. Eddie convinces himself she is in love with him, but she has eyes only for Lloyd (who is now Eddie’s lawyer). 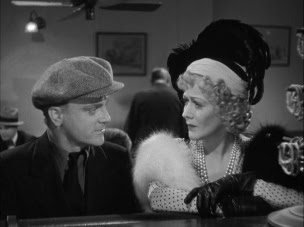 As the truth finally dawns on Eddie that Jean is never going to love him fate has even more unpleasant surprises in store. The stockmarket crash knocks the bottom out of the night-club industry and the repeal of Prohibition spells disaster for bootleggers who haven’t diversified their activities. George Hally has certainly done so and he continues to rise as Eddie hits the skids. The intertwining of the lives of the central characters is not finished yet however and Eddie may yet have a chance for redemption.

There are an extraordinary number of coincidences in the plot, in fact so many that this could easily be a disastrous flaw. It isn’t though, and that’s because director Raoul Walsh’s whole approach to the story has an epic quality to it. It’s like a myth from an age of legend, and myths don’t have to obey the rules of realistic story-telling. In a myth everything should be connected.

Walsh really does a superb job as director. The action sequences are among the best you’ll see in any movie from this era and they stand up extremely well today. Walsh’s sense of pacing is faultless This is a movie made by a great director at the top of his game. There are so many wonderful visual set-pieces in this movie. 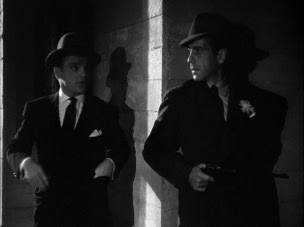 Bogart was still struggling to break out of supporting roles and to escape the straitjacket of being typecast as a psycho heavy. This is a supporting role as a psycho heavy, but it’s a good one and Bogart is effectively chilling. The scene right at the beginning where he shoots a young German soldier just seconds before the armistice comes into force remains as disturbing today as it was in 1939.

Priscilla Lane seemed destined for major stardom at this time but it was not to be. In the 40s she got on Jack Warner’s bad side and that was the end of her career. It’s a pity - she’s excellent in this film, a rather ambiguous character who comes across as the sweet girl-next-door but she uses Eddie quite shamelessly. Gladys George is memorable as Panama. 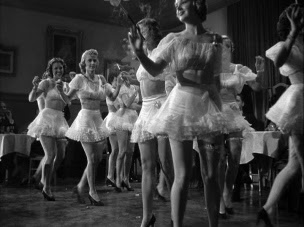 And then there’s Cagney. Cagney played a lot of gangsters but was always able to find some new variation. He hated the idea of merely repeating himself and although he was anxious at this time to break away from gangster movies he took this role because it offered the opportunity to play a gangster who was very different from the cocky sociopath of The Public Enemy. Eddie Bartlett’s weakness as a mobster is that he’s basically a nice guy. While George Hally is totally untroubled by conscience Eddie has a deep-seated desire to do the right thing, a desire he can never shake. And he has a touching emotional vulnerability. Cagney gives one of his greatest performances.

There’s an unexpected degree of emotional depth to his movie. It was criticised at the time for being overly sentimental, a criticism that now seems unjust. In fact it strikes just the right balance. It’s a movie that, considering its subject matter, is surprisingly free of cynicism (which might be the reason that not everyone admires it).

The Region 1 DVD includes a host of extras and can be picked up very cheaply.
Posted by dfordoom at 4:33 AM