Any movies that Howard Hughes was involved with tended to have troubled production histories, and such was the case with his 1930 First World War aerial epic Hell’s Angels.

It wasn’t entirely his fault. He started shooting it as a silent film then when it became obvious that talkies were the wave of the future he reshot it as a sound film. That decision made a very expensive movie even more expensive but money was never a consideration for Hughes. Hughes produced and also got the director’s credit although in fact no less than three directors had a hand in this production, including James Whale (soon to become much better known as the director of Frankenstein. 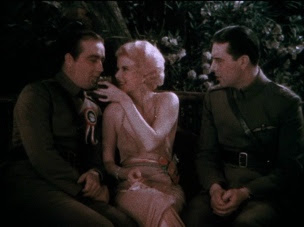 Hughes wasn’t overly interested in the plot or the characters. For him it was all about the action sequences. Unfortunately far too much time is spent in the first half of the movie on rather aimless scenes that are meant to introduce the characters. The script and the acting are so weak that despite all this effort the characters remain cardboard cut-outs. Once the aerial sequences kick in though the movie goes into high gear.

English brothers Roy and Monte Rutledge and a young German named Karl meet at Oxford shortly before the outbreak of war. They decide to holiday in Germany. Monte, the younger brother, spends most of his time chasing the local female population. Perhaps unwisely he includes among his conquests the wife of a high-ranking Prussian officer. The officer promptly challenges him to a duel. Monte is horrified that there are people who still take adultery so seriously. He has no intention of going through with the duel. He packs his bags and flees back to England, wile Roy fights the duel for him (and surprisingly enough survives). This sets up the characters of the two brothers. Monte is irresponsible, selfish and cowardly, although also charming. Roy is high-minded, noble and courageous, although he’s also something of a prig. Roy is in love with a girl named Helen (Jean Harlow). He thinks she’s the sweetest and most virtuous girl in existence. Unfortunately his touching faith in her is sadly misplaced. Helen is a good time gal. Once Monte gets to meet her he realises this immediately. She invites him back to her flat, where she delivers her famous line, “Would you be shocked if I put on something more comfortable?” No prizes for guessing what happens next.

War breaks out and of course Roy enlists immediately, in the Royal Flying Corps. Monte has no intention of enlisting but is tricked into it. Meanwhile Karl has been called up for service with the German military. 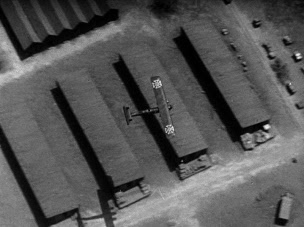 Karl ends up as an observer in a zeppelin. This is a rather alarming occupation which involves sitting in a small one-man gondola which is lowered from the zeppelin, presumably so the zeppelin can remain above the clouds while the observer aims the bombs from below the cloud cover. This sets up the highlight of the movie - the zeppelin raid. This is a visual tour-de-force. It’s not just stunning by the standards of 1930 - it remains one of the most extraordinary action sequences ever put on film.

Hughes follows this up with another extended action sequence that is just as impressive as Roy and Monte volunteer to fly a captured German bomber to bomb a munitions dump. This represents the only way to to give a forthcoming British attack any chance of success. The downside is, once they’ve bombed the target every German fighter aircraft on the front will be after them, and if they’re captured they will be shot as spies (and quite rightly so - it would have been a very dishonourable action indeed, something the movie glosses over rather glibly). Their own fighters will try to protect them, and the resulting aerial battle scenes are spectacular. Three men were killed during the filming of these scenes. 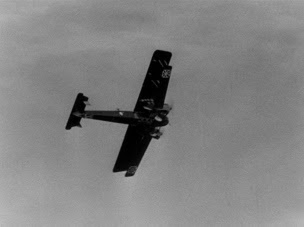 This movie has many problems. The pacing for the first hour is glacial. The script is weak. The characters ate stereotypes, and they’re not colourful stereotypes they’re dull stereotypes. The acting is atrocious. James Hall as Roy and Ben Lyon as Monte are truly awful. Jean Harlow would become a wonderful actress but this was her first significant role. She was still a teenager and her inexperience is all too obvious. On the other hand she is certainly sexy. Her performance is very uneven and at times rather bad there are occasional flashes of the brilliance that was to come.

The movie features a ten-minute sequence filmed in the early two-strip Technicolor process. As was always the case with this early version of Technicolor the colours don’t look quite right. In a movie like Mystery of the Wax Museum this was an asset, adding an eerie atmosphere. It’s less successful here, but it is the only chance you’ll ever have to see Jean Harlow in colour. 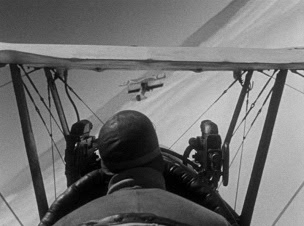 There are several other scenes (including the zeppelin raid) that are tinted, a practice that was common in the silent era but very unusual in a sound picture.

There are some pre-code moments although the movie’s pre-code status is indicated mostly in the fairly graphic nature of some of the aerial combat scenes. It’s often forgotten that the Code cracked down just as hard on graphic violence as it did on sexual content.

The Region 4 DVD from Bounty is the print restored by UCLA Film School and it looks splendid.