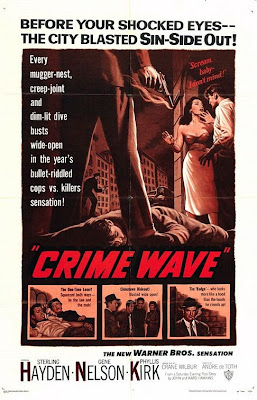 Crime Wave is a movie that had been largely forgotten until fairly recently. This 1954 Warner Brothers production blends film noir themes with a partly documentary feel. This was a combination that was often attempted, but very rarely as successfully as this.

The story of how the movie came to be made as it was is in itself the stuff of legend. It was to have been a relatively prestigious A-picture with Humphrey Bogart and Ava Gardner lined up to star, and with a generous 35-day shooting schedule. That was until director André de Toth informed Jack Warner he didn’t want Hollywood’s biggest star for the lead, he didn’t want any stars, he wanted Sterling Hayden. Warner decided the director was mad and told him he could forget the big budget and the 35-day shooting schedule. He’d have to do it as a cheap B-picture on a 15-day schedule. Which according to de Toth was what he wanted all along. And he proceeded to complete the picture in just 13 days.

Which was an extraordinary achievement given the amount of location shooting involved. 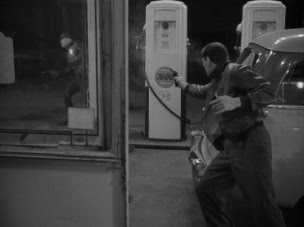 The locations are one of the highlights. The result was one of the most realistic looking crime films of the 50s.

The plot is pretty basic, but what’s impressive is what de Toth does with it. We’re straight into the action right from the first minute, with a bungled gas station robbery. One of the three robbers is shot and wounded, a cop is killed, and all for $130. The wounded hoodlum, Morgan (Nedrick Young) makes his way to the home of a guy he was in St Quentin with.

Steve Lacey (Gene Nelson) has gone straight. He has a good job as an aircraft engineer, he has a beautiful wife, and they have an apartment. It’s not a luxury apartment but it’s OK and it’s theirs and they’re happy. Now Steve will find that staying on the straight and narrow isn’t so easy. 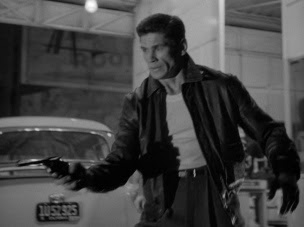 It’s bad enough having a hoodlum turn up on their doorstep, but things get a whole lot worse when Morgan proceeds to die in their living room. Steve Lacey knows he should call the police but he decides to call his parole officer first. It’s too late. The cops have already arrived at his apartment.

Heading the investigation is Detective-Lieutenant Sims (Sterling Hayden). Sims doesn’t like ex-cons and doesn’t have any sympathy for them. He’s chasing a cop killer and he’s not about to worry about whether poor Steve Lacey really has gone straight and really is just an innocent caught up in this whole mess. He’s also quite happy to lean on Dr Otto Hessler, a doctor who was struck off years ago and now makes a living as a vet and patching up criminals. Hessler is terrified but Sims is determined to make use of him even though it will most likely get the poor guy killed. 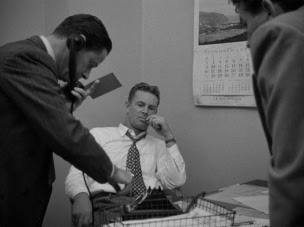 Sterling Hayden gives a trademark Sterling Hayden performance. In fact it’s the same performance he gave in every film, but it’s perfect. Charles Bronson (still known as Charles Buchinsky in 1954) is suitable menacing as one of the three bank robbers. Ted de Corsia goes close to stealing the picture as Doc Penney. He’s the brains of this particular criminal outfit, and he’s wonderfully sleazy and sweaty and generally reptilian. And then there’s Timothy Carey, adding a touch of the bizarre as a very creepy and totally insane hoodlum named Johnny. Phyllis Kirk gives a strong performance as Steve Lacey’s wife. The director’s preference for using lesser known actors rather than stars pays off handsomely.

Most scenes are shot in the locations where the action is supposed to taking place, including (according to James Ellroy and Eddie Muller on the commentary track) the actual headquarters of the detective branch of the LAPD. The street scenes in LA are extraordinary, a real time capsule. 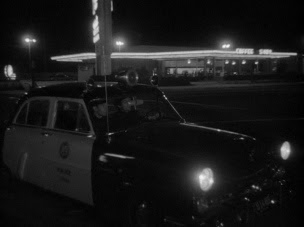 There are some process shots but many of the scenes shot in cars really were shot simply by putting a cameraman in the actual car giving the movie a very strong feel of the action being filmed as it happens out on the streets.

What this all adds up to is a triumph of style over substance, and style is something it has in spades. An absolute must-see for noir or crime movie enthusiasts in general. The Warner Home Video DVD includes a very enthusiastic commentary by James Ellroy and Eddie Muller plus a documentary on the film, and as with most of Warner’s film noir DVDs the picture quality is glorious.
Posted by dfordoom at 11:36 AM