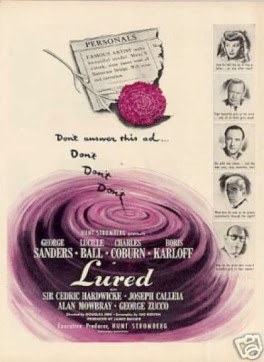 Lured was directed by Douglas Sirk in 1947 but if you’re expecting to see signs of the Sirk style of the 50s then I’m afraid you won’t find much of it in this movie. And if you’re expecting a film noir (and it’s labelled as such on both wikipedia and IMDb) then you’re going to be similarly disappointed.

It’s a straight mystery/suspense thriller. The good news is that while it’s no masterpiece it’s still worth seeing.

Sandra Carpenter (Lucille Ball) is an American working as a taxi dancer in London. A serial killer has been at work in London, finding his victims by placing ads in the personal columns. When he kills he sends Scotland Yard a poem describing his latest murder. His latest victim happens to be Sandra’s best friend.

Inspector Harley Temple (Charles Coburn) is increasingly desperate to find some lead. When he brings Sandra in for questioning he realises immediately he’s dealing with a smart level-headed woman. Just the kind of woman Scotland Yard needs. Sandra Carpenter finds herself on the payroll of the Metropolitan Police, working a very dangerous assignment indeed - she is going to be used as bait to catch the poet killer.

Inspector Temple picks likely looking personal ads for her to answer, bringing her into contact with an assortment of men all of whom are sufficiently suspicious that any one of them could conceivably be the killer.

Sandra hasn’t yet found the murderer, but she has found love, with one of the suspects. Robert Fleming (George Sanders) runs a very up-market night-club. It’s a profitable business but one suspects that his motivation for running a night-club has as much to do with meeting attractive young women as it has to do with making money. He’s a self-confessed cad, but does that make him a killer?

Another suspect is his business partner Julian Wilde (Cedric Hardwicke). There’s also a sleazy butler who recruits parlour maids for a white slavery ring. And an equally sleazy South American businessman who runs the white slavery ring. And there’s a slightly deranged dress designer (Boris Karloff) who uses the personal column to find young ladies to model his dresses for him, in private. They all seem like plausible suspects.

Of course it’s inevitable that the killer will choose Sandra as his next victim, and he taunts Inspector temple by sending him the death poem before he does the killing. Now Scotland Yard must find the killer before he gets to Sandra.

For 1947 the movie does have a rather decadent, even slightly perverse, feel. Apart from the white slavery angle there’s also the fact that the killer bases his death poems on the poems of Baudelaire.

Lucille Ball is surprisingly good. She plays it straight. There is mercifully no trace of the Lucy of her later comedy TV series. She’s feisty and likeable. George Sanders is of course delightful. Charles Coburn seems to be in every old movie I see these days, playing either loveable rogues or, as in this case, loveable police detectives. Boris Karloff is creepy and sympathetic, as only Karloff could be. As an added bonus you get George Zucco - as a heroic Scotland Yard cop.

This was apparently a remake of a 1939 Robert Siodmak movie, Pièges. The Blackhorse Entertainment Region 2 DVD doesn’t have any extras but picture quality is very acceptable. If you can find this one for a reasonable price it’s worth grabbing. As I said at the beginning it’s no masterpiece but it’s solid entertainment.
Posted by dfordoom at 5:45 PM