Impact is a 1949 film noir that is not quite a neglected masterpiece but is still better than its fairly modest reputation would suggest.

Walter Williams (Brian Donlevy) seems to have it all. He has worked his way up from the shop floor to his current position as head of a major car manufacturer. He has a beautiful young wife. His marriage appears to be perfect. And to top it all off, he’s basically a decent likeable guy and he’s well-respected and generally well thought of. Although he’s a tough businessman who has the sense to realise that success serves no purpose unless you’re prepared to give yourself a break now and then to enjoy the fruits of that success.

Of course in film noir appearances can be deceptive. In fact his lovely young wife Irene (Helen Walker) has a lover and the two of them are plotting to murder him. 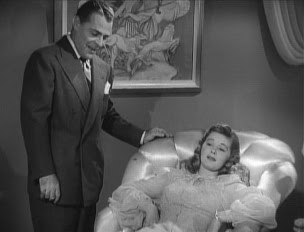 There are major surprises in store for all of them as the murder attempt on a lonely country road goes badly awry. Williams survives while the lover dies in the wreck of Williams’ car. Williams, suffering from a mild concussion, wanders off in a daze and then grabs a ride on a passing furniture van. He ends up in a little town called Larkspur. The following morning he picks up a copy of the newspaper and discovers that he is officially dead. The body in the car had been burned beyond recognition and the police made the natural assumption that it was him.

By this time he has figured out that his wife wanted him dead. Angry and disillusioned, he has no desire to return to his home in San Francisco. And Larkspur seems like a nice little town. It seems even nicer when he meets Marsha Peters (Ella Raines). Her husband had been killed in the war and now she’s trying to run their gas station on her own. Unfortunately she’s not the world’s greatest mechanic, although it has to be admitted that she looks quite amazingly cute in her mechanic’s garb. Walter Williams on the other hand is very very good indeed at fixing cars - it’s how he started his career. She discovers this by accident. She has no idea who he really is but she needs a good mechanic desperately and she offers him a job. Right now working in a gas station seems a lot more attractive to him than returning to his murderous wife so he accepts. Pretty soon he and his new boss are going out together and well on the way to falling in love.

While Walter slowly regains his trust in life and love things have been happening in San Francisco. The police have put the pieces of the puzzle together but without realising there are pieces missing. As a result they have come up with the wrong picture, but what they do know is that the car wreck was no accident, it was murder. And Irene Williams looks like a very plausible suspect. There are plenty of plot twists after this including some original and unexpected ones. The pieces of this jigsaw puzzle can be fitted together to make a whole succession of different pictures. It’s really a pretty nifty little plot.

There’s a quite impressive and interesting array of talent behind this movie, including Oscar-winning cinematographer Ernest Laszlo. Even more interesting is Dorothy Davenport who co-wrote the screenplay. She directed several movies including a great little early 30s exploitation shocker, The Road to Ruin. 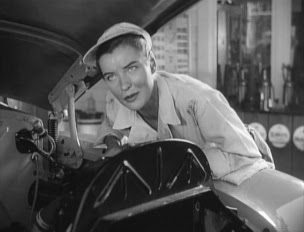 The movie benefits from a very strong cast. Brian Donlevy and Ella Raines are extremely good while Helen Walker is a deliciously evil femme fatale. Charles Coburn is the loveable Irish cop in charge of the case. While his performance is fine the character is perhaps a bit too loveable and this weakens the dramatic tension in the later stages of the film.
It’s sad to see Anna May Wong reduced by this time to minor parts - she plays the WIlliams’ maid.

Visually there’s not too much noir style in evidence but the attempted murder scene on a mountain road is absolutely dripping with ominous atmosphere. 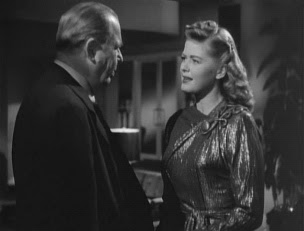 This one’s in the public domain but there are apparently a couple of pretty decent DVD editions. My copy was included in one of the Mill Creek public domain boxed sets and it’s a surprisingly serviceable print.

Not quite in the first rank perhaps, but a very good second-rank noir and definitely worth catching.
Posted by dfordoom at 1:37 PM