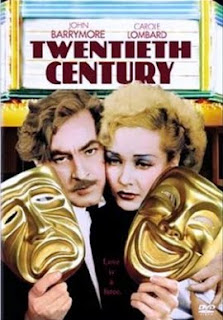 Since Twentieth Century was directed by the man who went on to become the unchallenged master of the screwball comedy, Howard Hawks, you’d expect that this 1934 Columbia movie might well be a very early example of the genre. And in fact it has most of the features you’d expect from this type of movie. And being a Howard Hawks movie you’d expect it to be very good, and you’d be right again.

John Barrymore is theatrical impresario Oscar Jaffe. He’s had a string of Broadway hits and he’s about to unveil his latest discovery, a young actress named Mildred Plotka (Carole Lombard). Although she’s not Mildred for long - he’s renamed her Lily Garland. Unfortunately she’s absolutely terrible and everyone who works for him is convinced he’s finally taken leave of his senses. They beg him to get rid of her but he stubbornly insists that she has the makings of a great Broadway star, possibly the greatest of them all.

Oscar is in fact quite mad, but he turns out to be correct. Before long Lili Garland is the toast of Broadway. And she and Oscar are lovers. But to say their love is tempestuous would be an understatement of colos

sal proportions. This is no tempest - it’s a full-blown hurricane. Eventually Lily walks out and then commits the most unforgivable of all sins - she goes to Hollywood.

Oscar’s career takes an immediate nosedive. His attempts to groom new stars fail dismally. He has a string of flops over the next couple of years, which culminates in having to flee Chicago in disguise to avoid his debtors. He boards the Twentieth Century Limited, the most famous train in North America, bound for New York. But as luck would have it, Lily Garland is aboard the same train. His faithful business partners encourage him to make the attempt to patch things up

with Lily and sign he to a new contract, this being his only hope of avoiding complete financial ruin. Of course things don’t work out neatly.

Hawks is in complete command. The pacing is frenetic. Having a script by Ben Hecht and Charles MacArthur certainly doesn’t hurt either. Have much of the action take place on the train is another asset - I’ve always firmly believed you just can’t make a boring movie set on a train.

And then there’s the c

ast. The supporting players are fine, but the movie’s two biggest assets are Lombard and Barrymore. They’re superb and the sparks fly whenever they’re on screen together. Barrymore is particularly good - it’s an outrageous totally crazed performance and it demonstrates that he was absolutely perfect for the screwball comedy genre.

The theatrical background works nicely since both Oscar and Lily are completely artificial creations - they’re so much a part of the theatre world that they treat the whole of life as a stage performance.

There’s really not a single weakness to this movie. It’s a delight from start to finish.
Posted by dfordoom at 1:27 AM