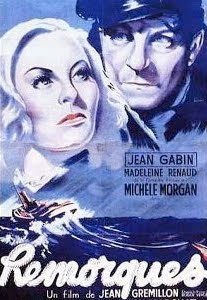 Jean Grémillon’s Stormy Waters (Remorques) isn’t quite in the style of the French film noir of the 30s (or poetic realism as it was also known) as I’d hoped, but it does have enough in common with that style to make it interesting. And it’s a good film in its own right.

Although released in 1941 it was apparently shot a couple of years earlier. Given the fact that France was going through the trauma of war and the Occupation at the time we’re probably fortunate the movie was completed and released at all. The plot is extremely simple but that’s one of the movie’s strengths. It’s the response of the characters to events that matters.

André Laurent (Jean Gabin) is the captain of an ocean-going tug, the Cyclone. The salvage and rescue work by which he and his crew make their loving is lucrative but dangerous. André has no real choice though. The sea is in his blood. His wife Yvonne would like him to give up the sea. He keeps promising to do so but of course he never does.

Events come to a crisis for André when the Cyclone attempts to tow in a stricken freighter, the Mirva. The Mirva’s captain is strangely indifferent to the fate of his ship. His

wife Catherine (Michèle Morgan) is on board and it appears that their marriage is, like the ship, drifting helplessly towards the rocks. In fact his wife takes to one of the lifeboats and is picked up by the Cyclone.

The attraction between André and Catherine is immediate. Catherine tells André that she and her husband are through. We see to have here a setup for a classic romantic triangle but it turns out to be more complicated than that. There are in fact three rivals for André’s love - Catherine his wife Yvonne, and the sea itself. Yvonne and the sea are very similar - they both demand unconditional love and absolute commitment, and both are capable of

overwhelming the unwary sailor and dragging him down into the depths.

Everything in the movie relates to the sea or ships. The Cyclone’s job is to rescue ships that are adrift. The lives of all the major characters are also adrift. They are not unhappy because they are weak or bad or selfish. They’ve simply failed to choose a definite course and to maintain it, and have not realised that without a steady hand on the tiller you will always be in danger of shipwreck.

The attraction between André and Catherine is not quite what you expect, given the conventions of romantic movies. Catherine does not represent the stormy waters of uncontrollable sexual passion; rather she represents for André a safe port. He feels comfortable with her. But to reach that safe haven he will have to navigate his way through some treacherous emotional waters.

The ending is emotionally wrenching and works superbly.

The movie benefits enormously from the extreme underplaying of both Jean Gabin and Michèle Morgan. They had been paired very successfully a couple of years earlier in one of the great masterpieces of French cinema, Marcel Carné’s Le quai des brumes (Port of Shadows). They have a wonderful chemistry that is all the more powerful for not being obvious and overtly sexual.

As you’d expect from a French movie of this period the black-and-white cinematography is very impressive, even in the slightly battered print that was screened on Australian cable TV.

Perhaps not quite in the same class as the very greatest French movies of that era such as Le quai des brumes and Hôtel du Nord but still a wonderful movie. Highly recommended.
Posted by dfordoom at 8:28 PM