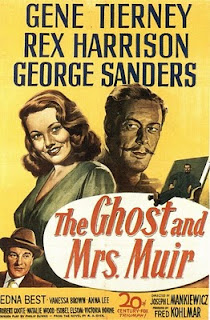 I have dim memories of seeing the much later TV series of the same name, but until tonight I’d never actually seen the original 1947 movie version of The Ghost and Mrs Muir.

The movie wasn’t quite what I expected. I suppose I expected more of a lighthearted romantic comedy. It certainly has plenty of that, but it has a bit more besides.

Mrs Lucy Muir (Gene Tierney) is an attractive young widow who gets fed up with living with her obnoxious sister-in-law and her equally obnoxious mother-in-law and decides to rent a little house of her own, along with her young daughter and her faithful housekeeper. Since these are the very early years of the 20th century this is a slightly bold movie, but Mrs Muir is a fairly bold woman in her own quiet way.

She soon discovers why Gull Cottage was so cheap. It’s haunted by the ghost of its previous owner, a sea-captain of slightly dubious moral reputation, a Captain Gregg. The ghost is initially hostile, but wh 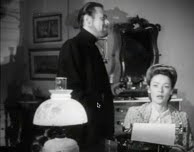 en he discovers that Lucy Muir is a very strong-willed young woman who has no intention of being frightened out of her new house he decides he rather likes her. And despite (or possibly because of) his colourful past and his rough-and-ready manners, she decides she rather likes him as well.

Predictably, their friendship develops into something that is perhaps a little more than friendship, but there is a very big obstacle standing in the way of true love, since one of the partners is in fact dead.

What’s most surprising is that the movie deals sensitively and intelligently with this rather difficult problem. This is a love story, but while Hollywood love stories are usua

lly complicated this one is very complicated indeed. It becomes even more complicated when Captain Gregg finds he has a rival (George Sanders), who has the considerable advantage of being alive.

Even more surprising for a 1947 movie is the fact that the movie has some definite risque moments. Captain Gregg and Mrs Muir decide that not only are they prepared to share a house, they’re also prepared to share a bedroom. Captain Gregg assures Mrs Muir that this won’t be a problem, since he’s a bodiless spirit, but while he’s bodiless he does have the power of sight, on her first night in the house it is obvious that he has watched her undressing for bed, and has watched wi

th considerable admiration. Perhaps the most surprising thing in a 1947 movie is that Lucy Muir doesn’t appear to mind!

The difficult with a plot like this one, given that the movie is essentially a romance, is how on earth do you give it the required happy ending? The actual ending seems, with the advantage of hindsight, to be the only possible ending. And it works extremely well.

The casting of his movie was rather bold. Rex Harrison was not an obvious choice to play a salty sea-captain but he does very well. And Gene Tierney usually played troubled women, so it’s refreshing to see her playing a woman who is free of weird hand-ups, and it’s pleasing that she manages to make Mrs Muir not only very likeable but also not the slightest bit bland. It’s a completely delightful performance.

And it’s a completely delightful movie. Directed by Joseph L. Mankiewicz, with a great score by Bernard Herrmann, this is a classy and highly entertaining example of the best of 1940s Hollywood movie-making.
Posted by dfordoom at 6:37 PM