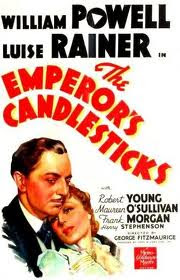 Any movie with William Powell is probably going to be worth watching, and a spy movie with a large dash of romance sounds pretty promising as well so I had high hopes for the 1937 MGM film The Emperor's Candlesticks.

And were those hopes fulfilled? Basically, yes. This is not a serious spy movie in the style of Hitchcock’s Secret Agent and Notorious or Michael Powell’s The Spy in Black. It’s more of an adventure romp combined with a love story, plus some great sets and costumes. It was based on a story by Baroness Orczy. She wrote The Scarlet Pimpernel so she certainly knew a thing or two about writing adventure stories.

William Powell is Baron Stephan Wolensky, a Polish nobleman who also happens to be a spy. When Polish nationalists kidnap the Russian Grand Duke Peter and hold him to ransom, demanding the release from prison of a Polish activist, Baron Wol

ensky is given the dangerous task of taking the ransom note to the Tsar. He must travel across country to St Petersburg. He gets what seems to be a lucky break when an acquaintance, Prince Johann, asks him to take a pair of antique candlesticks with him. They are intended as a gift to a lady but the candlesticks conceal a secret - they have a hidden compartment built into them. The Baron decides this wold be an ideal place to hide the ransom note.

Things start to get complicated when the glamorous Countess Olga Mironova (Luise Rainer) persuades Prince Johann to allow her to deliver the candlesticks instead. She also intends to use the secret compart

ment to hide an important document. The Countess is also a spy, but she works for the Russian secret police, the Ochrana. She is therefore a deadly enemy to the Baron Walensky. What follows is a total romp as the two of them battle to gain possession of the candlesticks after they are stolen. And of course they fall in love, but they are on opposite sides in a deadly game of espionage.

The setting is left rather vague but it’s obviously some time before the First World War, probably in the closing years of the 19th century. Being an MGM movie you’d expect the costumes and sets to be impressive, and they are. 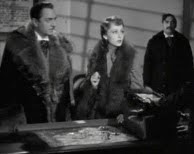 und eastern European. She’s delightfully glamorous, and just a little bit wicked. Powell makes no attempt at an accent but his natural charm and confidence make him a convincing enough nobleman. Robert Young is fairly subdued as the kidnapped Grand Duke.

You’re not going to get spectacular action sequences in a 1937 MGM spy film but it does have numerous plot twists, there’s quite a bit of tension, there’s plenty of fun, and there’s an unlikely and apparently doomed romance.

George Fitzmaurice was a very experienced director and he handles proceedings with a very sure touch. This is a movie that achieves exactly what it sets out to achieve, and does do with style and panache. Recommended.
Posted by dfordoom at 4:24 PM